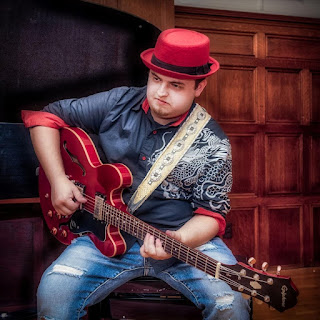 Electric Guitar Driven Blues/Rock, Progressive Blues with some Jazz/Blues/Rock Fusion.
Born in 1997 in St. Louis MO., Matt "The Rattlesnake" Lesch started playing guitar at the age of 11 and started out playing mostly rock and hard rock. By the age of 12 he had heard of a musician named Stevie Ray Vaughan, and that changed his life forever. After hearing SRV, Matt took a serious interest in Blues music and started listening to artists such as Albert King, BB King, Freddie King, Buddy Guy, Robert Johnson, Muddy Waters and Howlin’ Wolf to Jimi Hendrix, Eric Clapton and Jeff Beck. Make no mistake, his young age is far outweighed by his bleeding passion for the Blues. When you Hear The Rattlesnake you can imagine and feel the intensity of the Blues passion channeling thru him. His Debut Album "Furious Strike" Is a Guitar Driven Journey into a Blues/Rock Experience your sure to Love!!!