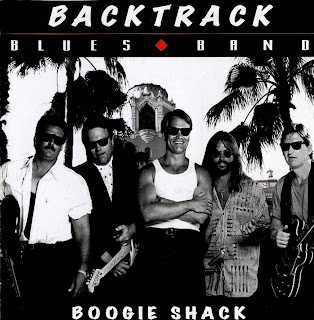 The Backtrack Blues Band is one of Florida's longest running and most accomplished blues bands. Founded in 1980, the group has performed continuously for over 30 years.
Backtrack's high energy Chicago-style blues, with exceptional guitar, harp, and vocals, has made the band a constant on the Florida blues concert, club, and festival scene for over three decades.
The group has established a strong reputation for creative songwriting and has released four CDs and a DVD of original music, all of which charted on the U.S. blues radio charts. The latest release, "Captured Alive" rose to number 17 on the National Blues Radio Charts (July 2012) and to number 3 on the Florida Roots Radio airplay chart.
The quintet consists of Sonny Charles on harmonica and vocals, Spider Ingram on lead & slide guitar and vocals, Little Johnny Walter on rhythm guitar and vocals, Stick Davis on bass, and Joe Bencomo on drums. Backtrack has appeared as an opening act in concert with many legendary blues artists, including B.B. King, Stevie Ray Vaughan, Buddy Guy, Gregg Allman, Robert Cray, Johnny Winter, Kenny Wayne Shepherd, and others. The group has also been recognized by the Tampa Bay community as a leader in the blues music arena by garnering three Tampa Bay Music Awards as the area's "Best Blues Band."
The band's leader has significant experience in producing top quality blues music shows, having founded and managed the award-winning Tampa Bay Blues Festival for over 20 years. The Backtrack Blues Band brings a high level of professionalism, originality, and talent to the Florida blues scene and would be an excellent choice for your club or festival.