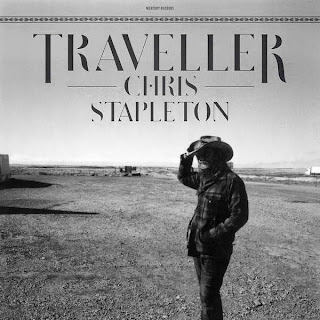 Making the transition from hit songwriter to artist is never the easiest road to take in country music. However, when you have the resume and the industry buzz that Chris Stapleton has, then that road becomes much less rocky and much more probable. Known for his time fronting The Steeldrivers, as well as landing major songwriting cuts with acts such Kenny Chesney, George Strait, and Darius Rucker, Stapleton now takes the next step in his career with the release of “Traveller,” the title track and lead single from his highly anticipated forthcoming album. The common theme of being a drifter and/or a rambling man is the focus of the lyric, but Stapleton crafts this familiar story in a way that makes it fresh again. His soulful baritone vocal carries you through well-crafted, poetic lines that describe life’s confusions such as “everything changes like the desert wind” or “my heartbeat’s rhythm is a lonesome sound, just like the rubber turning on the ground.” Stapleton balances this thought provoking lyric right against the edge of country as far as the sound goes, but he touches it against a variety of styles that pull from influences of Southern Rock and Americana to create a sound that is uniquely his. With the depth that this lyric presents, this is sure to satisfy a craving that many country fans are in need of right now. Stapleton has effectively come along at the right place and at the right time with something that is raw, real, authentic country and he sings it with a conviction that opens the book to his own life and invites us into it.