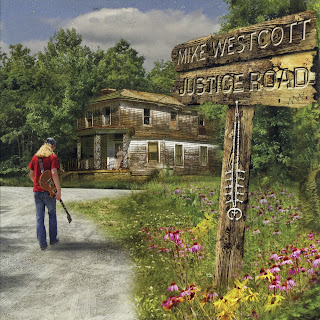 “Justice Road” is a collection of eleven original songs that combines southern rock, and the blues, with explosive guitar solos to tell the auto biographical story of singer/guitarist Mike Westcott.
“Shoot Me” is a blues influenced tune that takes on the vibe of a Stevie Ray Vaughan classic.  Tommy Lepson provides thick organ pads, as drummer Jean-Paul Gaster lays down a syncopated groove.  On this track, Westcott’s voice sounds like a mixture between Stevie Ray Vaughan and Dr. John.  Westcott slows things down a bit in “Heaven Called,” as he presents a song in tribute to the passing of his mother.  You can hear the pain in his guitar, as he takes a powerful solo that builds into a full band break down that lands on the repeated lyric “Heaven called another angel home.”
“Back Again” shies away from the standard classic rock progression and arrangement.  The two main sections alternate between a heavy distortion guitar groove and a broken down spoken lyric.  The solo section throws a curve ball, by switching into a 6/8 feel where Westcott pulls out all of the stops, and performs one of the best guitar solos on the album.
“The Hammer” is a hard driving rock tune that starts off with a distortion picked guitar intro.  Bassist Jay Turner, pushes the song and lays down a strong foundation to groove over.  This track features several full band lines that are used to build the song into a cry-baby guitar solo.
“Sittin On the Porch” takes on the role of an interlude, and features Westcott playing acoustic guitar filled with harmonics, advanced strumming patterns, and flourish lines.
The CD closes out with the funk tune “Grunt,” that has the feel of a jam session classic. This tune is filled with twists and turns that go from a rock influenced 70s wah-wah funk jam to an odd metered outro that switches back and forth between 4/4 and 3/4 time signatures.
With a classic rock feel that sounds familiar, and plenty of twists and turns to keep things fresh, Mike Westcott’s “Justice Road” is an album that any blues lover would be proud to have in their collection.