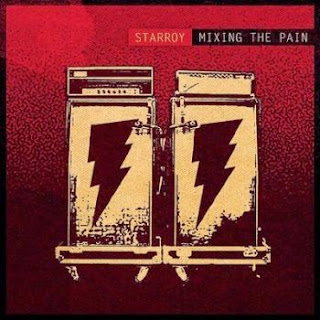 Starroy — Now stateside following a successful European tour in the final months of 2012 — is back at work in the studio working on a stash of hand-picked, Southern-tinged rock-and-roll tunes written and honed while traveling the globe. This well-seasoned five-piece based in Jonesboro, Arkansas, delivers a powerful mixture of country-fried, psychedelic jam-rock-and-roll regularly, pleasing fans from all walks of life — no matter their musical tastes.
Starroy has been compared to the likes of the touring greats: The Grateful Dead, Grand Funk Railroad, Widespread Panic, and Gov't Mule, and has received rave reviews of both its recorded material and its live shows from music critics all over the world.
Rejuvenated and armed with powerful new material, Starroy also is throwing another member into the mix just in time to record on the group's second album: drummer Jacob Brumley has joined the band, and former drummer and longtime member Heath Finch will now be contributing percussion. The lineup change is Starroy's answer to life-altering challenges the group faced the past two years, and it will take the band in a new direction toward a more radio-rock-friendly sound, says Bassist Justin Boswell.
"The pieces of the puzzle have aligned at the right moment, and Starroy has seen once again that the only way to survive as a group, after more than a decade of playing together, was to change and grow," Boswell explains. "This does not mean we aren't going to be who we are and always have been. It just means we wanted to offer the world a product that was even more thought-out, a product that is even better than anything we've previously done."
Already, Starroy — which also includes lead vocalist and guitarist Adam Barnard and guitarist Barry Fowler — has accomplished a lot, and the group has garnered high praise from music critics covering all genres. Dave Terpeny of Kynd Music Magazine writes: "Starroy delivers a stunning combination of blistering blues rock assaults, intimate ‘gathered around the fire’ acoustic jams and smoky progressive rock instrumentals.” Nashville Rage described Starroy this way: “Hailing from the unlikely berg of Jonesboro, Arkansas, comes groovy college funk-pop band Starroy, who may fit into the jam-band world but sound much more like a reincarnated Blind Melon than anything Phish-y." “How these guys managed to stay independent and not get swept off their feet by rushing hordes of major record labels is beyond me…," says Michael Jones of Blog Critics Magazine. Longtime music editor Jim Harris at the Arkansas Times writes: “Absolutely the most stage-ready rock-jam group I’ve seen in a long time...” Now with a renewed love for creating music, a new direction, a new level of respect and appreciation for one another, and a sense of drive to keep alive a band that has seen much hardship and tribulation — Starroy's commitment, talent and strong bonds can't be measured in dollars and cents, or even described fully with words. This is Starroy: A band of rock-and-roll brothers.