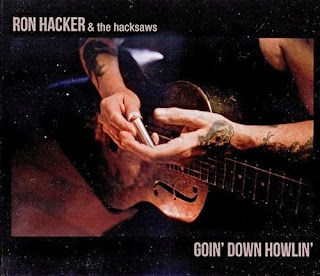 Ron Hacker, born in 1945, for me is one of the most compelling and honest blues men of our time. The Slide Virtuoso, who is based since long years in San Francisco is not known in vain as the ‚White Trash Blues Man. He calls in his texts clearly what touches him and his fellow man and he is not afraid before clear statements. The Baby is gone or the whiskey tastes too well, those are not his subjects. You can convince yourself by listening to the seven albums he has recorded - partly as Ron Hacker & the Hacksaws or Ron Hacker.Friends of something harder pace will be happy with the albums <Back Door Man> (2000) and <Burnin‘> (2003). For friends of solo or Club performances <Bad Boy> (2007) and ‚Live in San Francisco> (2012) is a must. Ron has occurred in all major West Coast festivals including the Monterey Jazz Festival, as well as in Europe (including Germany). Unfortunately, it has not yet given the big breakthrough in our area - Ron Hacker is still an insider’s tip. Hopefully his just-released CD <‘Goin‘ Down Howlin> will change that. Ron Hacker (guit., voc.) & his Hacksaws - Artis Joyce (bass) and Ronnie Smith (drums) - engage extent on great songs of blues music. Ron contributes with the opener <Evil Hearted Woman> (acoustic) and <Big Brown Eyes> successfully own compositions that have a good chance to become classics itself. The other 9 pieces are written by Little Walter (<Hate to see you go>), Sleepy John Estes (<Ax sweet Mama>), Jimmy Reed (<Baby what you want me to do>) and others. Chuck Berry‘s <Nadine> is represented as well as Chester Burnett‘s‘ <Howling for my Darling>. Ron Hacker presents a harmonious blend of some classic popular songs on his very own, intoxicating nature.Hacker is a seasoned, mature musician far from mainstream and any image complexes. Listening to him is a great experience to see him live on stage is one of my unmet needs.