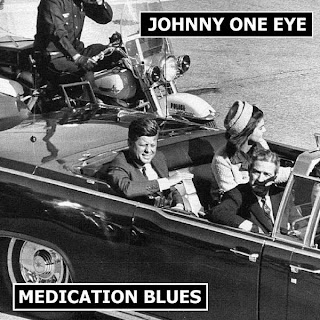 Johnny One Eye is a three piece group consisting of, tres hombres; Mark Oneye - (guitar and lead vocals), Stuart Oneye - (bass guitar and backing vocals), John Oneye - (drums, percussion and backing vocals).
An all original band playing their own brand of American blues-rock music in the vein of Creedence, Springsteen, Black Keys and Steve Earle. Bringing you a new, unique and yet authentic taste of the greatest blues-rock the world has ever heard, an unstoppable rail-road train of rhythm. A commentary on the state of the world, as valid now as it was back then. All three members contribute to the song writing process, bringing their varied musical backgrounds and influences to bear on the finished tracks. This is evident in the riff based driving rhythms and free flowing interplay between the elements of the band. The music is loosely based on the seventies style of American blues-rock, but updated for the life and times of the twenty first century.
The band itself is named after an old American folk hero, 'Johnny One Eye', an outlaw renegade from the early War of Independence era. However, for us, Johnny is no freedom fighter, he is a badder, meaner and all round nastier character. A spirit that turns up at all the worst moments in your life. If you think it couldn't get any worse, then Johnny ain't turned up yet!
Автор: errny на 01:29