The Carson Downey Band - All The Way 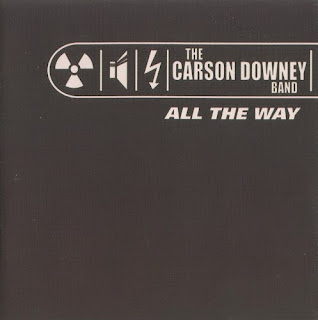 Just before the summer of 2000, The Carson Downey Band burst upon an unsuspecting blues world with a phenomenal debut CD full of boundless energy. Ever since, the band has been receiving rave reviews. Upon experiencing the exciting 55 minute, all original, 12 track, hard-core blues disc, I now realize why. The CD is appropriately titled for a band who is well on their way as evidenced by their recent Maple Blues Awards (Canadian Handys) and East Coast Music Awards. Hailing from a small town outside Halifax, Nova Scotia, the band includes Carson Downey on lead vocals and guitar, brother Murray Downey on drums and Marlowe Smith on bass. Carson has been playing guitar for over 27 years and up until now has been Atlantic Canada's best kept secret. Rounding out the sound are guests Donny Muir (B-3) and Kenny Mackay (piano/horns) while backing vocals are provided by Novalee Bucham and Lisa MacDougall. Throughout, their exhilarating support leaves you breathless and exhausted.
The thundering trio delivers plenty of muscle and grinding guitar beginning with the first track, "All The Way". It has an anthem type chorus but there is plenty of room for organ and guitar solos. On "Hit And Run Lover", its time to get funky while Downey's guitar performs acrobatics as it weeps, screams, whispers, and roars. If you don't notice some part of your body shakin' during the tune, you better check your pulse to see if you are still alive!. "A Little Understanding" is a rocked up R&B tune with detailed and frenzied soloing from Carson. Things slow down for one of those 'my woman is gone' songs called "I'm Sorry". Here, Carson shows his diverse vocal talent which should be tearing up the soul charts. "Burnin' Up" is a real smoker with searing guitar licks followed by the heavy, rock-edged groove of "Are You In Or Are You Out".
The band's music contains traces of pop, funk, R&B, soul, blues and rock. They combine elements of each genre to create a savage assault of in-your-face, knock you on your ass music. Marlowe admits, 'its not laid back blues, its really uptempoed' while Carson adds 'I knew I wanted a style of my own' and self describes his band's music as 'rock, funk and blues.'
Their heavy roots music will appeal to blues fans and rockers who enjoy turbocharged guitar. Its all brilliantly packaged including a liner jacket that features a multitude of colour photos. The blistering force of an out of control hurricane oozes from these pictures. This band, fires on all cylinders like a precision-tuned engine running at full speed. Don't be surprised if you find yourself rushing out to check the listings to see if they are performing at a club nearby. Today's contemporary blues scene is no longer isolated to the likes of the Kinsey Report, Carl Weathersby, Michael Hill and Ronnie Baker Brooks. Move over boys, the Carson Downey Band is about to become the reigning champions of the new bluesbloods.