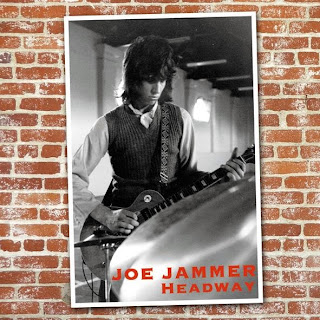 Welcome to the fascinating world of Joe Jammer – the bona fide musician who owes his career almost entirely to Led Zeppelin, his nickname to Zep’s Jimmy Page, and his formidable guitar skills to guitar lessons from an early age – courtesy of Joe’s dad!
Joe Jammer was born Joe Wright on Chicago’s south side. Jimmy Page gave him the nickname because Joe used to jam a lot at the time. But a fair bit happened before that moment! Thanks to Joe’s father insisting that his son had better learn to play an instrument, Joe soon displayed considerable talent and got paid to play at the shockingly young age of only 12! By the age of 16 he was roadying for Jimi Hendrix, by the age of 17 he was working for The Who, and by the age of 18 he was working for Led Zeppelin – primarily as Jimmy Page’s guitar technician. Not bad… not bad at all!
So impressed were Led Zep that upon advice of Page, Joe Jammer was urged to re-locate to London (where Page would take him under his personal wing). That date was November 1969. Pretty soon Jammer managed to establish himself as a very sought-after session musician, working with the likes of Mick Jagger, Ringo Starr and Jerry Lee Lewis to name but a few. Oh, and ironically it was also in London that Jammer came to appreciate good ole Chicago blues… life works in mysterious ways indeed.
Initially signed to EMI, Jammer released a solo album called BAD NEWS in 1973. Far from receiving bad news, Jammer received the good news that his record label had so much faith in him, not only did they agree to let him lose on the vocals, but they also agreed to pay the studio costs for his next album, HEADWAY.
The session musician on the album read like a who’s who in the rock firmament: Mitch Mitchell (who had played with the Jimi Hendrix Experience) features on drums, John Gustafson (Roxy Music) features on bass, Johnny Contardo (Sha Na Na) features on vocals, Fitzroy ‘Brother’ James added an African touch on percussions, and Jean Roussell, the first black session musician to make it rich in London, added a distinct funk vibe on his keyboards. The gang is rounded up by Poli Palmer on flute. Though as good as it sounds (and HEADWAY does sound very good), the album never saw the light of day until now! A promo tour for the album was hampered by visa problems that Jammer suddenly found himself confronted with. During a two-week show in Germany, Jammer found out that he was not allowed back in the UK as his visa had expired, and in the end nothing was sorted out. So it was back to the States. Without main man Joe Jammer in tow, EMI lost interest in promoting HEADWAY and shelved it. It was only after Jammer’s mum died a few years ago that he came across old recordings of the doomed album while clearing out her flat… and this time round he took it to the one and only Angel Air Records label for re-issue. Voila! Did I mention that life works in mysterious ways?
The album’s eleven spanking tracks sound as crisp and energetic as ever, with a very strong funk vibe throughout. Listeners won’t be disappointed.
Opener ‘Broken Little Pieces’ layers on rhythm and groove and flows smoothly - the combination of vocals and instruments complimenting each other to the max. ‘Can’t Yer Catch?’ is more rock-orientated, albeit blues-rock. We get an absolute smoothie with ‘Alive Another Day’, it’s a composition that would serve a movie soundtrack well. The slick sounding ‘Afraid To Make A Friend’ is in a similar vein – it’s less funky, instead its slow-paced jazzy ambience spells lounge club chic and sophistication.
We’re touching organic ground again on ‘It Wasn’t Meant To Be’, a number interspersed with dynamic guitar riffs. The raw stonking groove of ‘Travellin’ and the funky wah-wah sounds of ‘Cool Breeze’ make for an uplifting experience, while the tongue-in-cheek ‘One For The Road’ embraces more classical rock vibes.
‘The Watcher Laments’ pays homage to super-fly 70’s funk rock, fragmented by exquisite rhythm arrangements yet executed in an effortless flowing manner. ‘Not Tonight’ can best be described as a sonic odyssey that owes more to psychedelic and folk-infused rock – it’s dreamlike composition invites you to glide along imaginary clouds, only occasionally interrupted by thunder in the guise of Jammer’s fine solo work. The unusually titled ‘Axe Me Another (Don’t Lose Your Head)’ sounds as unusual as the song’s title. It’s free-floating and experimental jazz-funk rhythm may not turn this into a very danceable number, nonetheless there’s enough going on here to lose yourself into!
And there you have it. Another Angel Air gem that can be appreciated and enjoyed forty years after its initial recording!