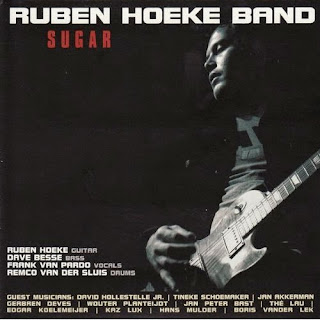 Ruben Hoeke started playing the guitar at age fourteen. His childhood dreams of being a professional Football player in the Dutch National football team soon disappeared when he heard the guitar intro to Guns 'n Roses classic `Sweet Child O' Mine'. That’s when he realized what he wanted to be. Inspired by this haunting guitar riff, he decided to trade his football for a guitar. It took about six guitar lessons to find out that he would be better off learning to play by listening to records.
In 2004 Ruben sets up his own bluesband. The Ruben Hoeke Band is a band with a repertoire of easy to hardcore blues, from boogie-woogie and soul to heavy rock. With their enthusiastic performance the band has secured a firm position on the Dutch music scene. They literally rock every stage and festival!
November 2005 finds Ruben's band recording their debut album ”Sugar” for major record company Munich Records. The album, which wass released in April 2006, features guest appearances by (among others) Jan Akkerman, Kaz Lux, Tineke Schoemaker, Boris van der Lek, David Hollestelle, Wouter Planteijdt and Thй Lau.
A journalist defined the band as ”a mighty blues-formation with an unique sound" and their performance; ‘sparkling like hell’.
The band, with blues classics and their own original material, are guaranteed to bring the house down, from small clubs to the largest festivals….. Seeing and hearing is believing! Although Ruben is a guitarist who can relate to several music styles, 'the rhythm & blues' is something that comes to him naturally: straight from the heart, and in May 2008 Ruben is voted Holland’s best guitarist, and receives the prize, ”The Duiveltje” that he holds onto with pride after beating some tough competition.