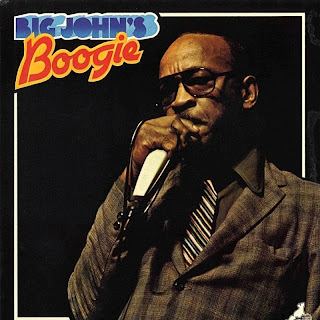 This set by the obscure yet legendary one-armed harmonica player and singer Big John Wrencher is one of the great overlooked blues classics of the 1970s. Recorded in England in 1975 (with two bonus tracks from 1974) with Eddie "Playboy" Taylor's band, the Blueshounds, it is the only recording in Wrencher's small catalog that begins to capture the intensity, soulfulness, and elegance of his live performances. Wrencher was a composer as well as an interpreter and arranger of great blues and R&B classics. The set begins with an amazing read of "Honeydripper" by Joe Liggins. Began as a simple blues shuffle, Wrencher's harmonica solo before the tune's main groove kicks in turns it into something else entirely — a spine-loosening groover of the highest order. When he begins to sing in his clear, smooth baritone, the seams begin to split and the track bleeds blue all over the stereo. His arrangement of the traditional blues tune "Third Degree" is a nearly Famous Flames-styled funk tune with its choogling riff and pumped-up bass in the front of the mix. Wrencher's voice makes it really growl and shake, however. He doesn't ask questions when he sings; he shouts what he knows. Wrencher's own "Lonesome in My Cabin" is a spooky, minor-key blues that has the author's moaning, groaning vocal at its heart, and a repetitive piano riff shadowed by the electric guitar filling space along with Wrencher's harmonica. The four-to-the-floor boogie of "Come On Over," another Wrencher original, rolls, twists, and turns on his harmonica's woven lines, his huge, ringing voice moving into a guttural groove colored by Taylor's lead guitar. This is a Joe Turner-styled shouter, but Wrencher's voice makes it so immediate, so full of cracks and splinters, it's virtually alive. The album's final track, "I'm a Root Man," one of Wrencher's own, is a slow to mid-tempo blues with a call-and-response line that acts as nothing but a vehicle for the author's storytelling way of singing. It is sensual, raw, and full of the kind of otherworldly life listeners seldom hear in blues records anymore. This set is a treasure. Period.