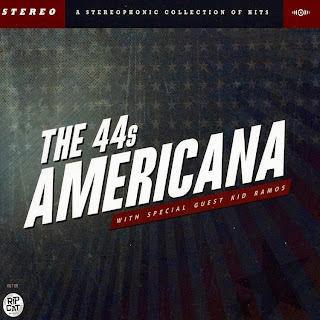 California blues rockers that fuse traditional LA and Chicago hard core blues pull off a wonderful back to the future fusion of old and new with steam powered energy and Kid Ramos at the controls adding his guitar fuel to their existing fire. The cats in this quartet were obviously born in a road house and grew up licking spilled beer off the floor while their parents ignored them. How else could they come up with such an authentic sound that is familiar without being derivative while it kicks ass all over the yard? No two ways about it, party over here. Grab a ride on this blues train, pronto. --Midwest Record - Entertainment News
There is no sophomore jinx for The 44s. The album is a big step forward for this Southern California based band. Their first outing, Boogie Disease sounded like ''the Red Devils meets Kid Ramos.'' There is absolutely nothing wrong with that, but Americana reflects more of the band's own emerging personality. They offer up 11 originals and just two covers. Ramos is, again, at the helm as producer. His guitar can be heard all over this fine CD. It is however the band's vocalist and guitarist, Johnny Main, who comes across as the star on this outing. Bassist Mike Turturro, drummer J.R. Lozano and harmonica player Tex Nakamura round out this band which has broken out of the local scene here in Southern California and just returned from their second tour.
This record also benefits greatly by the album's other special guest, tenor saxophone monster Ron Dziubla. If you are a fan of the 44s, you will also appreciate the album's generous helping of music. At 13 songs and 54 minutes, there is simply more music to enjoy than in their debut release. On Americana the band spreads its wings and takes a more varied, multi-textured approach to their music. The 44s have come a very long way, very quickly.
The bottom line here is that this band has chosen not rest on its laurels. Their debut album Boogie Disease was very well received. The 44s however made the decision not to try and recycle a successful formula but to grow as artists. Americana proves that they are not only a solid live performing ensemble, but are an emerging force to be reckoned with in the studio as well. Americana serves notice that the 44s are driving down the blues highway at a break neck speed and are going in the right direction.