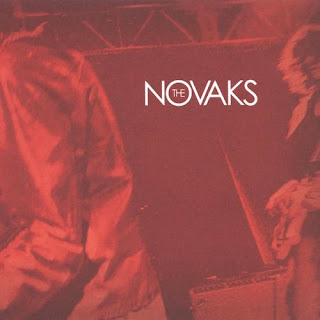 The Novaks are everything good about the past with a modern rock spin. Check out the videos for "GoodBye Rock and Roll Band" and "I'll Give You A Ring" at www.myspace.com/thenovaks
Three years ago I was struggling to understand just what it was about the White Stripes that made everyone love them so much. I asked my friend James, who’d been listening to them for years already (and is therefore much cooler than me), to enlighten me. He said, “The thing about the White Stripes, Kate, is that they’re just straight Detroit rock n’ roll.”
When I first listened to The Novaks, who hail from St. John’s, Newfoundland, "straight-ahead rock' n roll" was the phrase that sprang to mind. Not surprisingly, however, it’s sprung to the mind of every Novaks’ reviewer I’ve come across, alongside proclamations about how the band have risen out of nothing, from nowhere -- Newfoundland -- to save rock n’ roll.
Formed in 2001 under the name Persona, The Novaks are Mick Davis (vocals/guitars), Elliot Dicks (drums/percussion), Mark Neary (bass/vocals) and Chuck Tucker (guitars/vocals). Mick and Chuck grew up across the street from one another in Wesleyville, NL (presumably the “Dullsville” of this album); they moved to the city (St. John’s), hooked up with Mark and Elliot, changed their name, set up studios in an old community hall and an abandoned tennis club to record in 2004, and are now on the loose in cities across Canada.
So, does “straight-ahead rock n’ roll” appropriately describe the sound of The Novaks self-titled debut? Yes. The Novaks rock. In a very straight-forward manner.
Is this something you want to listen to? If you’re a fan of Tom Petty or The Rolling Stones (both of whom The Novaks have been, justifiably, compared to) or if you can’t get enough of your local rock station’s version of “The Drive at Five,” then, yeah, probably.
Then again, we generally don’t demand too much of this kind of rock, either. If it’s got a good beat, a few kick-ass riffs and solos, simple bass lines (hell, even a little cow bell), and a singer who sounds convinced he can pull it off, we’re on board for a number or two. But what does it take for a band to pull us in for a closer listen?
It varies. I care about lyrics. I have standards, but I think they’re fair. I had problems in particular digesting the lyrics on “Ann” and “I’ll Give You a Ring” (which is too bad, because they’re both really catchy, fun songs). “Ann” starts out innocuous enough -- “Ooh, pretty one / Can we take a little trip? / Have some fun?” --- but then, out of nowhere, factory work is introduced (“factory whistle blow /papers in a stack”), things heat up on the highway (“burnin’ down the road / with you in my lap”) and Ann is revealed as a “cute little knockout on the assembly line.” I’m not questioning the potential of assembly line workers to be knockouts (it’s been awhile since I’ve seen An Officer and a Gentleman, but I remember the last scene well enough). It’s the song’s next revelation that troubles me: “All that sweat / for a little piece of pie.” Oh my.
At least that lyric has the ability to confound, though. There are two options as to what “I’ll Give You a Ring” might be about. At first I thought the upbeat nature of the song might somehow subvert its message – a yeah, you trampled my heart and in a million years I would never call you sort of thing. But in the end the song’s not even that surprising. He’s going to give her a ring. A real one. She makes his heart sing.
The best track on the album, “Doesn’t Anybody Hear It,” transcends this cliche territory (the poorly conceived factory scene, the ring-giving that’s gonna “make daddy so happy / make mama cry”) for moments on end. When Davis sings “Didn’t want to make a video / Is that the way to steer it? / Didn’t enclose no photo / Doesn’t anybody hear it?” I want to say say yes! I do! But then we roll onto “Goodbye Rock And Roll Band” and I’m back where I started.
But this is what happens when you examine straight ahead rock n’ roll too closely: you come across sounding like a bit of a jerk. Because, really, some albums aren’t meant to change your life. They’re meant to be listened to. Loudly. Besides, many Novaks’ listeners won’t be moved by my complaints; the noise of their hands rapping on their steering wheels will drown out any space for further analysis.