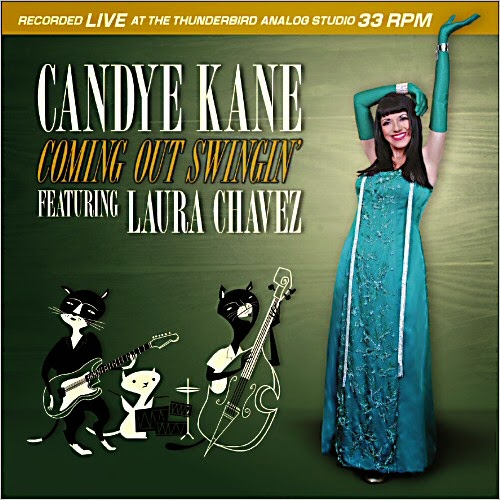 At some point in the life of every true artist, adversity becomes a crucible, shaping and developing her or his work, whether it's economically, emotionally, or physically. Sometimes the human being is defeated, but the art survives. More often, the artist fights back, going into the marrow of the survival instinct itself and delivering enduring works. Candye Kane has fought her share of battles for the last 30-plus years, and has consistently delivered top-flight records and fiery performances. Her current battle with cancer not only hasn't stopped her, it hasn't slowed her down, and has resulted in a resolve to further herself as an artist. The evidence is in her last three recordings -- 2009's Superhero, 2011's Sister Vagabond, and this one, Coming Out Swingin' -- which was recorded live in an analog studio. Kane freely acknowledges the gracious assistance she's received along the way from friends, artists, doctors, etc. But something else is at work on these three recordings; actually, it's someone: guitarist, co-writer, and musical soulmate Laura Chavez, whose name is prominently featured on the cover and whose guitar playing and musical direction are now a signature part of Kane's sound. Of the 13 songs here, the singer and guitarist co-wrote nine, and co-produced the record with Thomas Yearsley. Musically, Kane and her crack band have visited many of these territories before -- the hard swinging, horn-drenched title track, the vintage jazz blues of "Rock Me to Sleep," the hard Chicago strut of "I'm the Reason You Drink," the jump blues of "You Ain't All That," etc. But there is more. Check the fingerpopping optimism in the southern R&B that fuels "When Tomorrow Comes"; the Stax-tinged soul in the militant "Rise Up," the shuffling Texas twang in "I Wanted You to Walk (Right Through That Door)," and the backbone-slipping New Orleans' R&B in "Au Revoir Y'All." Kane's choice of covers is especially effective, whether it's in Holland-Dozier-Holland's "Darling Baby," which melds smooth Motown grooves with gritty roadhouse R&B; Rick Estrin's smoldering, sensual, souled-out "What Love Can Do," and the burning double-time read of Lalo Guerrero's "Marijuana Boogie." Since bringing Chavez into her band, Kane's musical reach has expanded considerably. She's pushed herself in terms of stylistic diversity, and her vocals have a more sophisticated, nuanced phrasing that doesn't sacrifice her emotional honesty. Chavez's brilliant guitar playing is a second "singing" voice, creating a multi-dimensional resonance in her sound. Coming Out Swingin' is by turns funny, resilient, bold, and heartbreaking. It wills surely delight fans, and it will more than likely astonish newcomers.