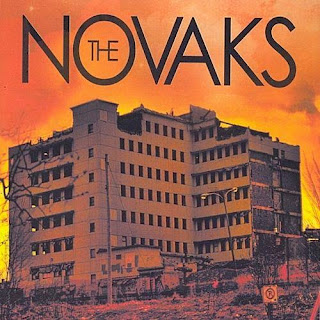 After a highly acclaimed, multiple award-winning debut, The Novaks took two years to record their follow up. The band went from a four piece to three with the departure of lead guitarist, Chuck Tucker and getting time to record proved difficult. Finally, they got into the studio and recorded “Things Fall Apart” in a little over a week at the Sonic Temple in Halifax. The record was recorded live off the floor and is certainly the most raw and nothing to lose sounding album of the two. As a three piece, lead singer, Mick Davis is given an opportunity to stretch his legs and take over lead guitar duties. This new sound relies more on the space between instruments which Davis fills with well-timed, melodic feedback and drawn out, dirty solos. The absence of the additional guitar is not missed and new fans of the Novaks will be impressed with Mick’s tasteful and hard-nosed guitar chops. The rhythm section is as hard-edged as the guitars with Mark Neary on bass and Elliot Dicks on drums. The poppy, jangle of the first record has been replaced with a rougher, riff-heavy sound that is reminiscent of the Canadian rock being made in the 1990’s. Mick’s vocal, as strong and commanding as ever, is reminiscent of Tom Petty and, at times, Dylan circa Highway 61. The band sounds tighter and more unified on this record. Lyrically, Davis is at the top of his game, often dealing with the frustrations of following such a successful debut, living up to critical expectations and going through significant life and inter-band changes. Musically, the band takes a more adventurous and sparse approach to the arrangements again, creating space and more of a dynamic ebb and flow. Where they wanted to get everything out and onto tape on the first record they now sound more patient and sure of themselves. They have grown as a band and the album reflects that growth. If there was any doubt about their ability as a three piece band, it was extinguished with “Things Fall Apart”.