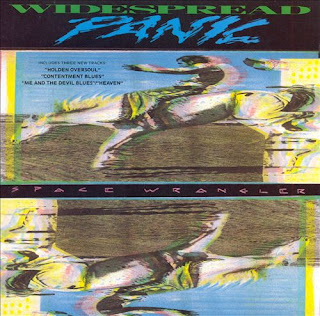 Space Wrangler is the first studio album by the Athens, GA based band Widespread Panic. It was first released by a small Atlanta label, Landslide Records, on February 4, 1988. It was later reissued four times, the first two times by Capricorn Records/Warner Bros. Records, and, in 2001, by Zomba Music Group. Space Wrangler will be reissued for the fourth time on vinyl only July 15, 2014 as a special reissue through Think Indie distribution, to be sold only at independent record stores.Due to time restraints on the original issue, concert staple "Conrad" was not included in the 1988 release. The reissues featured three extra tracks not found on the original release. Holden Oversoul and Contentment Blues were both from a John Keane Studio session in September 1990. Me and The Devil Blues / Heaven was recorded as one take and was taken from "try-out" sessions with Capricorn Records that would result in the Widespread Panic album. Space Wrangler has been released on vinyl, cassette and CD. The band played the original Landslide release in its entirety during the first set on December 31, 2008. This show was held at the Pepsi Center in Denver, Colorado. Nearly two years later, at their annual 'Tunes For Tots' Benefit concert on September 23, 2010, Widespread again used the first set to play through Space Wrangler in its entirety. However for this concert, they used the track listing from the re-released Capricorn Records version of the album- adding the four additional songs (three studio tracks) included with the reissues to the setlist. For the second set of this benefit concert, which took place at the Center Stage Theatre in Atlanta, GA, the band played the entirety of their self-titled, second studio album.