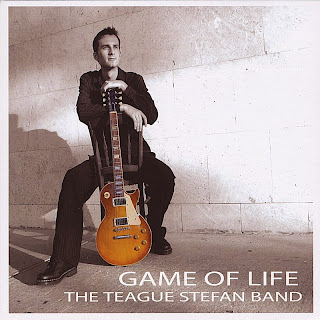 A strong Power Trio sound mixing Rock, Blues, and Funk to conjure up the sound of the 70\'s when Power Trio\'s were king.
As one of Central Florida’s hardest working musical acts, the three-piece Teague Stefan Band combine elements of blues, rock and funk to create a solid wall of electric guitar-driven sound that can be described as complex, aggressive and pounding: a full-bodied style that gives a subtle nod to power trios of the 70’s and artists from Hendrix to Stevie Wonder that remains refreshingly original and, above all, crowd pleasing.
The band’s repertoire includes the full-length studio album Hard Eight, and the newly released Game Of Life in which Teague Stefan, the songwriter, vocalist and guitarist for his eponymous three piece group, employs his talents in musicianship and composition. Stefan shows his range on the album, a textured, well-flowing arrangement of numbers such as the bluesy, soulful Power of a Woman, the funky, heavy No Matter What, co-written by bassist Todd Warsing, and the blistering One More Night. There is no post-production trickery employed here; Stefan’s guitar is just as, if not more, intricately fiery during the band’s live shows as it sounds on the album.
Indeed, the Teague Stefan Band is at home on stage, delivering with each live performance. Supporting Stefan are bassist Todd Warsing and drummer Dave Marder, accomplished and professional musicians who provide the firm rhythmic foundation for Stefan’s blazing guitar. The members of the band are perfectly synchronized, effortlessly meshing thanks to numerous shows and countless hours of practice. The group has appeared at the Orange Blossom Blues Society show at Hard Rock Universal, twice at George’s Music Springing the Blues, the Lakeridge Winery Blues Festival and at the Orlando Magic Family Day at the Amway Arena. The band continues to perform frequently at various local clubs and bars in the Central Florida area.
Stefan, who has played guitar since the age of seventeen, lists his major influences as Jimi Hendrix, Freddie King, Albert Collins, Stevie Wonder and Steely Dan. He has created his own brand of music that cannot be confined to either blues or rock, as it contains aspects of both (along with funk).
But ultimately the Teague Stefan Band defies an accurate description; seeing the band perform live is perhaps the only way to truly experience their raw, untapped talent. Stefan, Marder and Warsing are entertaining to say the least, with vibrant stage presence that exudes energy and charisma, but these are serious musicians; frontman Stefan exhibits complete control over his guitar, handling even the fastest of songs with effortless precision, flooding the stage with his original, jaw-dropping sound that one must experience live to truly comprehend. Although it’s been said before, it’s true: this is a band you don’t want to miss.