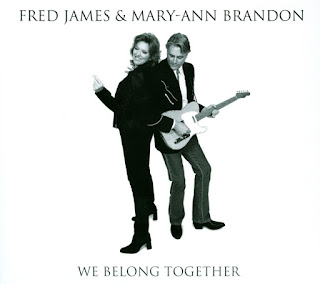 FRED JAMES & MARY-ANN BRANDON are the real deal. If you like southern roots Americana and blue eyed soul music, you’ll love the sound these two journeyman performers conjure up. They like to call it “stew pot music”, a mix of soul, blues and country that is uniquely their own. Their new CD release on SPV Records showcases their exceptional song-writing and musicianship. Their harmony blend is all their own but harkens back to the classic duet sounds of Delaney & Bonnie, Billy Vera & Judy Clay and Bonnie Raitt & Delbert McClinton. It’s a sound that is timeless. Born in Texas and raised in Kansas, Fred James arrived in Nashville in 1973 and immediately fell in with the young, new breed of songwriters that came up in the wake of Kris Kristofferson. Fred played guitar with some of the best, including Townes Van Zandt, Guy Clark and Billy Joe Shaver. He went on to play behind many other great performers in the rock, country and blues fields. Artists like Vern Gosdin, Dr. Hook, The Amazing Rhythm Aces, The Memphis Horns Band, Frank Frost & The Jelly Roll Kings, The Sam Lay Blues Band and Tommy Tutone all have used Fred’s guitar skills to their advantage. Fred has five Grammy nominations for his song-writing on releases in the “Best Blues Album” category as well. He’s written for Johnny Winter, Koko Taylor, Charlie Musselwhite, Sonny Burgess, Son Seals, Shemekia Copeland, The Amazing Rhythm Aces and Junior Wells & Bonnie Raitt, to name but a few. He’s also an accomplished record producer and has worked in that capacity with David Olney, Tim Krekel, Tommy Tutone, Sam Lay, Frank Frost, Billy C. Farlow, Homesick James, The Burritos, Charles Walker, Stan Webb and many others. Mary-Ann Brandon is a Nashville native who got into the music business in the early 1980's. Shortly after meeting Fred James, the two began working together and recorded several single (45 RPM) releases for a small independent label. That put them out on the southern roadhouse circuit where they slogged on for a few years. The duo gained national recognition but found little appreciation within the music business for their brand of southern blue eyed soul. Unwilling to bend to the "New Wave" trend in the business at the time, they decided to change directions and abandon the duet band project.By the late 1980s Mary-Ann had started to concentrate more and more on her song-writing. She went on to have her songs recorded by C.J. Chenier, Koko Taylor, Johnny Winter, Saffire, Kenny Neal and many others. Her songs have appeared on four Grammy nominated records in the Best Blues Album category. Mary-Ann is also an accomplished backup singer, having worked with Buzz Cason, Ken Saydak, Tim Krekel, David Olney, Tommy Tutone, Billy C. Farlow, Charles Walker, Johnny Jones and Dennis Locorriere to name but a few. Mary-Ann and Fred's successes as songwriters led to them signing (separately) to Appaloosa Records in 1990. This then, in turn, led to them touring Europe extensively for the next dozen years. They went on to record for Ichiban, BMG, Taxim, Indigo and ROAD Records. By the mid 2000s they decided to reevaluate their careers and stay around Nashville to concentrate on working together on a duet project. That, along with working their extensive back catalogs, kept them plenty busy. (Fred & Mary-Ann own the classic record company catalogs of the Bullet, Champion, Delta, Rich, Spar and Rogana labels, with recordings by B.B. King, Chet Atkins, Jimmy Buffett, Ray Price, Wynonie Harris and many, many others.) After all these years together it’s hard to believe that this is the duo’s first recording together. They’ve both recorded extensively, but always separately. That is, until now. And it’s certainly been worth the wait. Their new release “We Belong Together” is fairly brimming over with great songs, all but one (the classic duet that is the album’s title tune) were written by Fred and Mary-Ann. Thankfully, trends change and the music that is so dear to their hearts has come around full circle to be embraced by people who are hungry for an authentic sound. They intend to get back out on the road and bring their music to the people, and there will be more duet material to come. Let’s hope so, because just like beans and cornbread, Fred James and Mary-Ann Brandon truly belong together.

We Belong Together
Автор: errny на 12:34