Tijerina - Meant To Be 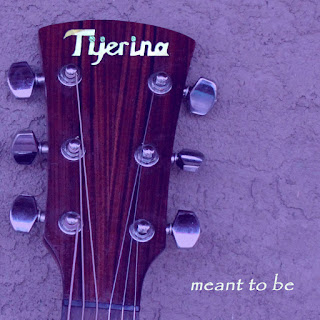 A fierce collection of electric and acoustic songs of love, regret and looking at the bright side while displaying elements of Blues, funk, Americana and pop that showcase this power trio’s brand of original blues-rock.
Praise for Meant To Be:
“This raw, intimate sounding recording presents a phenomenal guitarist…His musical talent & song writing skills are Top Shelf throughout “Meant To Be” and his razor edged solos show his knowledge of the fret board!! This Bluesman deserves a Celebration of the highest mark” Jackie Gisclar, Electric Rooster Entertainment
“Reminiscent of an almost-Robert Cray vocal vibe and writing style, blended with a slight Stevie Ray guitar motif, Tijerina continues the long tradition that is the blues. The latest release, Meant to Be, has all the frills of a solid blues record.” Chibo Acevedo, Marquee Magazine
“Meant To Be…combines traditional blues sounds and themes with words of positivity and hope…The solos are classy, tasteful, and will not lead you wandering off the strong beat provided by Dave Heidt on bass, and Curly Castillo on drums. The songs are original, almost eclectic, while still maintaining integrity. The vocals compliment the mix, and the songs are easy to get into and sing along with.” *4 star rating* - Steamboat Local
“One of the reasons that make this album so special is the freshness, the excitement and the grit that Tijerina infuses.”David Steinberg, Albuquerque Journal
“Tijerina is a master of vivid story telling though modern sound, and this energizing trio keeps the beat powerful and fresh.” Diego Mulligan, Weekly Alibi
About the Band
For over a decade guitarist/singer/songwriter, Todd Tijerina, (Tee-her-ee-na) has steadily made a living playing his fierce brand of cutting edge blues-rock in Chicago and the greater US as Tijerina's (formerly The Todd Tijerina Band) guitarist/singer. In addition to front man duties, a three year stint in Chicago ('97 - '00) offered opportunities to work as guitarist for such artists as internationally revered bluesman, Byther Smith, the legendary Harmonica Hinds, and BB's daughter, Shirley King. It was during this time in the Windy City that Todd and his band won Chicagoland's Rory's Blues Talent Competition 1999 which featured 35 acts from across the US. The victory funded recording expenses for the group's 2000 release, The Lowdown. Since then the band has released two more albums, Welcome Home in 2004 and Now in 2006, which have enjoyed radio play in the US, Australia and Europe.
Infusing funk, rock and jazz elements into his blues stylings, Todd has always striven to be unique as a songwriter and guitarist. Rootstime (Belgium) declares that he “creates his own style and sound… His manner of guitar playing, singing and songwriting is refreshing and inspiring.” The Promised Land Entertainment Magazine states, “[the band's] newest release is a perfect example of how to take the old and mix in the new to get a feeling of something very special… From the opening instrumental you can tell you're in for a ride you won't forget.” Putnay Thomas of Blues On Stage magazine states, “His music is distinctive… His guitar playing as much power and expression as any guitarist I've heard…It's just a matter of time before he gets a major label release.” Todd's unique sound is a result of his own take on songwriting with an emphasis on maintaining potent hooks, personal identity and grooves that cross genre lines which help explain his contribution's relevancy to blues as an evolving art form.
Providing the backbone and punch in Tijerina's grooves on bass/background vocals and drums respectively are Dave Heidt and Bill Vietch, both of whom have toured nationally and recorded with various blues, funk, latin, rock and jazz ensembles. Along with frontman, Todd Tijerina, they are well established as a force to experience first hand.