Steve Cropper - Dedicated: A Salute to the 5 Royales 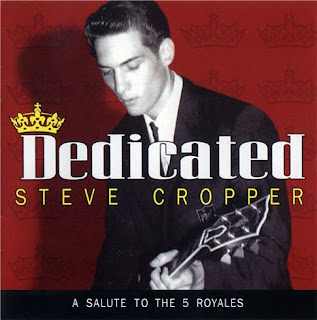 Rock and soul music’s back pages are littered with terrific, even legendary backing musicians who unsuccessfully tried to shift into the spotlight with disappointing results. Booker T. & the MG’s guitarist Steve Cropper is one of them.
But he’s been on a late career upswing recently, releasing two co-headlining projects with Felix Cavaliere and finally this “solo” set. The title is a sharp play on words since it functions as both a tribute album to one of Cropper’s first guitar influences, Lowman Pauling—the largely unsung guitarist and primary songwriter for the 5 Royales—and is the operative word of that group’s biggest hit, “Dedicated to the One I Love.” Cropper and producer Jon Tiven rummage through their musician contact lists to call in high profile guest vocalists such as Sharon Jones, Steve Winwood, Lucinda Williams, B.B. King and Bettye Lavette to give a retro yet far from musty spin to some pretty terrific 5 Royales hits.
Like Pauling, Cropper keeps his solos on low boil, preferring to punctuate the music with a similar mix of leads and rhythm lines that provided so much of the gutbucket groove on all those timeless Stax records from Otis Redding, Sam & Dave and dozens of others that bear his distinctive stamp. A few instrumentals like “Help Me Somebody” and “Think,” the latter best known through James Brown’s iconic version, give Cropper a chance to stretch out. But he’s more of a team player, letting Delbert McClinton and John Popper take center stage while he stays in a supporting yet crucial role, spitting out bluesy staccato lines as on his most storied work.
The 5 Royales’ songs mix 50s doo-wop with soul, gospel and a Coasters-styled hopped-up pop that still leaves room for short, tight guitar playing from Cropper. Williams appears twice, slathering her laconic, blowzy, slurred Southern vocals over the classic title track and the closing “When I Get Like This.” Lavette, Jones and Shemekia Copland inject the high-octane R&B, and the 15 sizzling tunes are clearly labors of love for all involved. The black and white cover shot of a serious 21 year old Cropper sets the retro mode for what’s inside.
Credit Cropper and producer Tiven for playing to the guitarist’s often laid back strengths while spiffing up the dusty legacy of one of the more influential if overlooked acts (and guitarists) in pop and soul history.