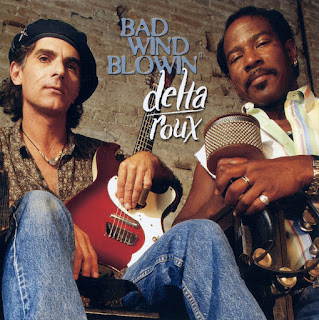 Delta Roux from Austin, Texas consists of Harry Bodine (guitars) and Mike Milligan (vocals, percussion). Backed by some of Austin’s top bass players and drummers, their CD, “Bad Wind Blowin'” was a strong debut on which some of the most crackling original blues/roots styles merged. Delta blues, New Orleans funk, Louisiana swamp blues and Memphis Deep Soul are all part of the Delta Roux gumbo.
Harry Bodine quit high school to move down South. In Austin, Texas, Harry made a name for himself as an expert on slide guitar. This was also where he met singer and percussion player Mike Milligan, a native Texan and Austin resident with a couple of years on club stages from San Antonio to Seattle as part of his resume. Mike is a very versatile interpreter with a lot of blues feeling, switching between the rougher style of his idol Otis Redding and the more elegant ways of soul/blues singers like Z.Z. Hill or Junior Medlow. With their soul band Memphis Train the duo Bodine/Milligan tested this new found collaboration on many Texas stages.
In 2002 they released their second CD, “Only A Fool.” With the drum slot now filled by Matt Ryan, the music of Delta Roux took a giant leap in to the boiling pot of gumbo goodness.