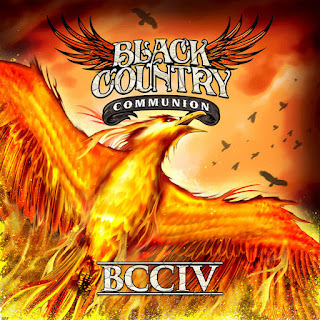 BCC IV is the upcoming fourth studio album from the English-American hard rock band Black Country Communion featuring bassist and vocalist Glenn Hughes, guitarist and vocalist Joe Bonamassa, drummer Jason Bonham and keyboardist Derek Sherinian. It’s the first album to be released since the band’s breakup in 2013. Recorded in Malibu, California, with producer Kevin Shirley, it is due to be released on September 22, 2017. BCC IV expanded the combination of blues rock (Bonamassa’s solo work) and hard rock (Hughes’ previous work with Deep Purple and Black Sabbath, and Bonham’s link with Led Zeppelin) that took place on the first three albums. It’s a high quality hard rock album that brings a great feeling that classic rock is alive and in good hands.
BCC IV opens with “Collide,” a fantastic rocker featuring a heavy riff, the band sets the album’s pace right away. “Collide” was released as single and music video in August, a great choice to open the album. “Over My Head” comes next with a memorable chorus it’s unquestionable radio airplay material. “The Last Song For My Resting Place” is the masterpiece of the album, with mandolin and fiddle throughout. The song is about Wallace Hartley, violinist during the sinking of the Titanic, and is the only track featuring Bonamassa on the vocals and also the only one written by himself. It’s incredible how versatile Joe Bonamassa is! “The Cove” is a song that Hughes wrote about his love for dolphins, a video of this song is expected. “Sway” and “The Crow” are great and intense rock songs. “Wanderlust” features a beautiful piano melody played by Sherinian and is the longest track with enough time for Bonamassa to deliver the best guitar solo of the album. Featuring a fantastic vocal performance by Hughes and a keyboard solo by Sherinian (reminding his Dream Theater’s days), “Awake” has possibly the coolest guitar riff. BCC IV ends with “When The Morning Comes” where you can definitely feel the band’s chemistry.
Recorded in only seven days, the band was careful enough not to repeat the previous albums. BCC IV sounds bolder with heavy riffs, undeniable hooks, melodic flair and infectious choruses. Kevin Shirley’s importance is huge by guiding the band into the right directions for the album’s best interest, and the result is spectacular.