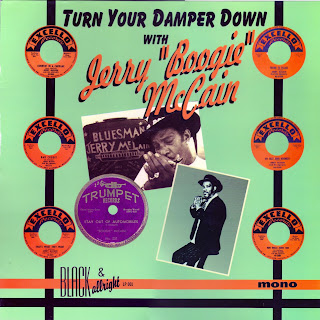 Jerry McCain is for harmonica just what he's for guitar Link Wray and for piano Esquerita! A wildman. If you'll ever have a chance to meet an alien and this green lamp headed creature ask you the one million dollars question, "What's Rock & Roll you back-warded scum?" you should say, "Jerry McCain, Link Wray and Esquerita"! That's right. OK you should add next Bo, Chuck & Little Richard but we 're flapping our mouths now. Anyway, if you ever wondered by whom barfed the wildest sides and then putted on vinyl plastic, that's the unholy trinity!
Jerry "Boogie" McCain is a key figure for this devil's music. He speed-ed up the blues in a way that make them instantly and without knowing it, punk! On  the well known label of Excello created mayhem. The same thing happened and a little earlier for the Trumpet. And what I'm offering here it's a whirlwind bash. Raw as hell and bad to the bone. Don't know if the young Rolling Stones or Pretty Things have known then, Jerry. I'm pretty sure though that even if they knew him, they wouldn't want to touch their hands on. Cause he's DIRTY!
I used the word "punk" somewhere. That happened not only for the attitude of his music. McCain purchased and cut by himself with a cheap record machine (remember, we're talking about the 50s, OK?) his earlier tracks like the one that sent to Trumpet Records, Little Walter's "Crazy 'Bout You Baby". He took Uncle John's side on "Run, Uncle John, Run!" as an answer to Little Richard's "Long Tall Sally" ("Gonna tell aunt Mary, about uncle John..."), recorded a session with the Shindings (better known now as Sam the Sham & the Pharaohs!) and to this day along with Kid Thomas, are the coolest cult figures of Rhythm & Blues and the punks of the idiom. D'ya really need more?