Paul Jones - Starting All Over Again 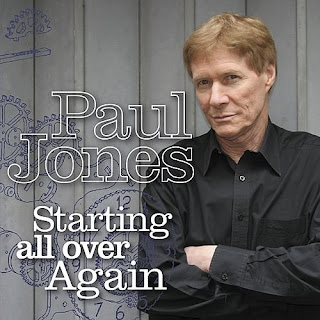 Paul Jones CD, "Starting All Over Again", has hit store shelves. It's his solo disc in over 30 years. For most of the time since his last album, he's been an actor (stage, film and television) including a role in the sci-fi cult classic, Space 1999, and a radio presenter on the BBC. Jones is best know to music fans outside the UK as the lead singer of Manfred Mann's hits like "Do Wah Diddy," and "Pretty Flamingo". He's also fronted The Blues Band (they have 17 albums to their credit since their founding in 1979!) and The Manfreds (which features most of the original members of Manfred Mann). He even co-composed the signature tune for Ready, Steady, Go!
The disc is released in the US by Collector's Choice Music and distributed in the UK and Europe by Continental Record Services of The Netherlands.
Produced by Carla Olson, Jones' studio band includes guitarist Jake Andrews, drummer Alvino Bennett, Tony Marisco on bass and Mike Thompson on keyboards. Eric Clapton joins him on two tracks "Choose Or Cop Out," and the title track, "Starting All Over Again." The disc also includes a cover of Van Morrison's "Philospher's Stone.". Soul singing legend Percy Sledge also guests on "Big Blue Diamonds." This track was initially released on Sledge's 2004 solo CD, "Shining Through The Rain."
In 1966, Paul Jones and Eric Clapton - along with Pete York, Steve Winwood, Ben Palmer and Jack Bruce - were part of the studio one-off band, The Powerhouse. A few of the tracks were released on What's Shakin'.