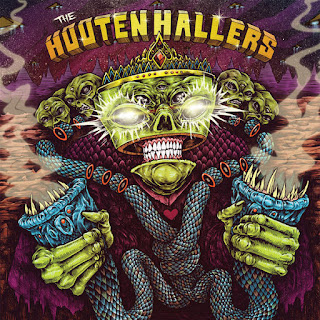 Vinyl LP pressing. 2017 release. The Hooten Hallers have been busting vans and playing blurry back room bars for a decade but on their self-titled album they come out swinging with new life and a healthy balance of freneticism and focus. Having toured for years as a garage-blues duo, the band has recently evolved to include baritone saxophone player Kellie Everett, who has had stints recording and gigging with the likes of Pokey Lafarge, J.D. Wilkes, The Legendary Shack Shakers and William Elliott Whitmore. Everett's background in jazz standards and music theory are spliced with the unhinged showmanship that have built the Hooten Hallers' rapidly growing national following to create an album that can be at times be wild, in your face, party music while still leaving space for a tender ballad with soul and classic country influence. This type of versatility has allowed The Hooten Hallers to expand their already varied audience. It's not uncommon to walk into one of their shows to see outlaw bikers dancing next to some college kids dancing next to an aging hippie or a couple of parents whose kids are at home with the babysitter. This album, recorded in a repurposed Masonic temple owned by Johnny Walker of the garage-blues band the Soledad Brothers, features contributions from Ryan Koenig (Pokey LaFarge, Jack Grelle) and was produced by Kristo Baricevic of Big Muddy Records.