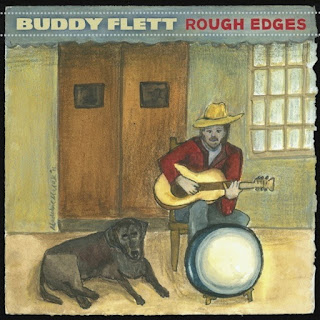 It's all in a name. Some names and occupations just go together, especially in sports. Harmon Killebrew, Orlando Cepeda, and Catfish Hunter are all baseball names. Blues musicians have similar iconic names. The Ur-Blues has Eddie "Son" House, Nehemiah "Skip" James, Tommy Johnson, and Charlie Patton. The generation after has Muddy Waters (McKinley Morganfield), Howlin' Wolf (Chester Burnett) and Elmore James. Today, we have Joe Bonamassa, Ronnie Earl, and Kenny Wayne Shepherd. Add to this latter group the Southern-fried, bona fide name of Shreveport-native Buddy Flett. He emerges as a compelling answer to Delbert McClinton and Roy G. Rogers, perhaps more authentic with his feet firmly planted in the musical myth of northwest Louisiana.
Flett appeared on digital media in as part of the journeyman Louisiana band The Bluebirds, led by his brother, Bruce and himself. Flett struck out solo with his recording Mississippi Sea (Out of The Past, 2007), a perfectly serviceable acoustic/electric blues outing that rang truer than the majority of similar recordings of the surrounding period. What Mississippi Sea revealed was Flett's modest but compelling guitar skills, a superb writing facility, and, above all, a blues voice full of Dixie dirt and grace.
In 2007, while on a blues cruise with mentor Hubert Sumlin, Flett contracted a viral encephalitis requiring a medically- induced coma and a month in the hospital followed by extensive rehabilitation. What appears in Rough Edges, is first recording since recovery, is a Buddy Flett transformed by the experience. What began with a competent and capable blues musician on Mississippi Sea emerges a fully formed artist (from the liner notes), one where a superior blues voice passes into the sublime.
All twelve selections on Rough Edges were recorded live in various small venues in Little Rock, AR, Shreveport, LA, and Waterman, MS. Since his recovery, Flett has remained close to home, but that should not be for long. This is a talent not to remain beneath a basket. These songs, save one, have Flett playing guitar while keeping the beat on a bass drum, making him a light- traveling minstrel in the truest sense. The is no flash here, only honest, sometimes corrosive music making of an intensity and white- hot nature that the listen can expect a sunburn is too close.
Flett favors open-tuned slide guitar playing for sure, but incorporates derivations such as his percussive "Train" and a most beautifully and strangely transformed "Lil Martha" (Duane Allman) on record. Flett does not require roman-candle guitar technique. He uses his conservative and informed talent to seek out only what is necessary in his play to convey his blues universe. Buddy Flett is brand new fresh air in a genre long locked in reverent worship and stagnant strict constructionism. A superb recording by any measure.
Personnel: Buddy Flett: guitar, vocals, bass drum; Brady Blade: drums (5); Chris Michaels: bass (5); Billy Gibson: harmonica (8).