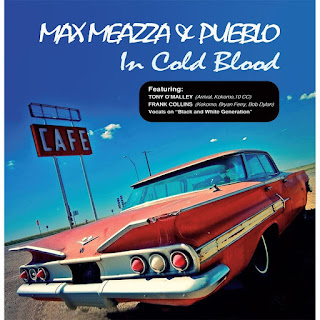 After "Race Against Destiny" featuring the australian guitar hero Rob Tognoni who played in Europe with Max now the brand new album featuring Tony O'Malley ( Arrival,Kokomo,10 CC) and Frank Collins ( Bryan Ferry, Bob Dylan)/
Max Meazza
His first record experience started with a productions company called Strum as one of the three members of the band Pueblo. His first musical audition took place at the Apple, in Savile Row, in London.
Later on they obtained their first contract with Polygram, the band recorded their first single, Mariposa, on Polydor label with LaBionda Bros.' production.
The song met with public and critic success . An album,bearing the name of the band and published by Polydor and Ariola ,soon followed. Max wrote about three quarters of the band's music and words.in that period the Pueblo played with Le Orme touring Italy and soon afterwards they published Song girl another single. Later on they recorded their last single Long knife Jackson . Afterwards Max felt the need of continuing on his own and he set about his work. The Pueblo broke up while Max went to Munich in order to record a single still published by Ariola produced by LaBionda. However Max's ideas diverged from his producers,so he decided to realize his first solo album which was published by Appaloosa with the title Shaving the car.
The following year with the collaboration of the american singer Skip Battin (Byrds,New Riders of Purple Sage and Flying Burrito Brothers), Max himself produced a new album Personal exile. In October 1984 his third album, entitled Better late than never came out. Two years later the album Nightime call was published, with many jazz artists like Tiziana Ghiglioni, Paolo Fresu, the first with the label Solid Air. More than three years went by before a new work, entitled Only angels have wings, published by Solid Air as a cd only. It contains 15 songs including his best hits besides some new songs and umpublished versions. In the end of 1993, Solid Air published his new album (cd only) entitled Summer of 71. During 1999 he recorded a new work, after so many years, with Pueblo called The Big Thunder (Solid Air/I.R.D.).
A new album came out in 2000 titled Fundamental, a collection with two new songs.
The next year follows a mini cd called " Unplugged recordings" with four songs recorded live in studio in 1985 At the end of 2006 Desolation Angels publish a new cd called " West Coast Hotel". The album has a warm welcome in Usa and Japan. Max with the help with the friend guitarist Lucio Bardi (Francesco De Gregori) is back on the stage again playing live with a new band.
During the 2009 Universal publish on cd the remastered songs recorded by Pueblo for the Polydor label including the original L.P. "Pueblo" and the singles like "Mariposa" , "Song Girl", "Long Knife Jackson". A new cd comes out in 2010 "Race Against Destiny" by the name of Max Meazza & Pueblo featuring the australian rock blues guitar hero Rob Tognoni in the cover of "Down and Dirty" and the jazz guitarist Gigi Cifarelli on " Solid Air" written by John Martyn.