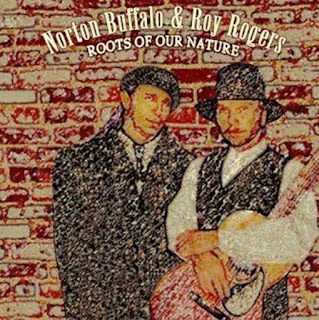 In an intimate acoustic setting, Norton Buffalo and Roy Rogers present a set of original tunes whose flavor suggests roots much further back in time. Aside from a few tasteful string parts, Roots is all about crisp finger-picked and slide guitar, Buffalo's earthy and expressive harmonica, and each artist's agreeably unpolished vocals. Their lyrics embrace traditional imagery, from saloon balladry to ramblin' songs. On "Trinity" the words sustain an especially rustic eloquence through multiple verses dedicated to visions of salvation. If retro affectation bothers you, it's best to imagine this session transpiring on some snowy night, within the glow of an iron stove at some crossroads general store. When heard on these terms, Roots can cast a spell to remember.
As quintessentially American as corn on the cob or the rodeo, the blues-streaked music created here by slide guitarist Roy Rogers and harmonica player Norton Buffalo marks their first studio collaboration since two early-'90s releases. Buffalo, a longtime Steve Miller Band member, and Rogers, who has played with Bonnie Raitt and John Lee Hooker, are so musically in synch that all 13 of their original songs on this CD serve as engaging testimonials to their friendship. Each West Coaster is a virtuoso on his instrument, but neither engages in showiness. Instead, their phrases combine in low-key expressions of faith, longing, struggle, and triumph. Rogers and Norton aren't outstanding singers, yet they get by without disrupting the special guitar-harp rapport at the crux of the music. Buffalo does deliver his all-time best studio vocal on "If I Were a King." --Frank-John Hadley