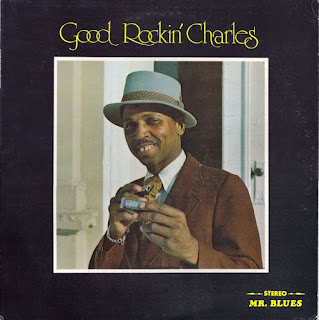 Good Rockin' Charles (March 4, 1933 – May 17, 1989)was an American Chicago blues and electric blues harmonicist, singer and songwriter.He released one album in his lifetime, and is best known for his work with Johnny "Man" Young, Otis "Big Smokey" Smothers, Arthur "Big Boy" Spires and Jimmy Rogers.
He was born Henry Lee Bester in Tuscaloosa, Alabama, United States, and later known as Charles Edwards. He relocated from his birthplace to Chicago, Illinois in 1949, and was inspired by fellow harmonica players, Sonny Boy Williamson I, Sonny Boy Williamson II and Little Walter. In the following decade, Charles found steady work with local Chicago blues musicians such as Johnny "Man" Young, Otis "Big Smokey" Smothers, and Arthur "Big Boy" Spires. In 1955 he settled on working in the backing band for the blues singer, Jimmy Rogers. Two years later, the short-lived independent record label, Cobra Records, offered Charles the opportunity to record his own work. However, Charles turned it down.
This wariness of working in a recording studio, had earlier seen him replaced at the last minute, as the harmonica player on Jimmy Rogers recording of "Walking by Myself" (1956). The role fell to Big Walter Horton, who greatly enhanced his reputation by playing on the track.
In 1975, Charles was finally convinced to record his own album. His eponymous effort initially appeared on vinyl on Mr. Blues Records in 1976, having been recorded the previous November.It was subsequently re-issued by P-Vine Records.Charles later suffered with ill health and was unable to record any significant further work.
Charles died in Chicago in May 1989, aged 56.