Tommy Crain & The Crosstown Allstars - Give It To Ya 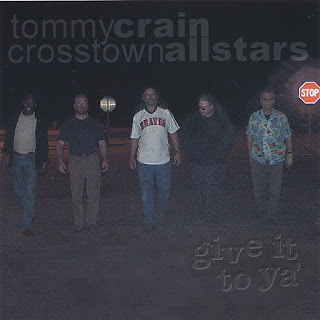 Southern rock legend Tommy Crain debuts his new band, Crosstown Allstars, in a high octane blues format. These guys cook .
Southern rock pioneer, Tom Crain, from Franklin, Tennessee, is best known for his two decades of work with the Charlie Daniels Band. He wrote songs and performed on over 20 CDB albums, winning a grammy for "The Devil Went Down To Georgia." Tom has played with countless other artists, and his fiery guitar work is always recognizable.
The Crosstown Allstars are not only a sought after rhythm section, but regularly appear around the Atlanta area as a stand alone act. Their ability to deliver honest, heart-felt blues, southern rock, classic R&B and jazz make them a definite crowd pleaser. The band members have played with such diverse acts as Cheap Trick, John Lee Hooker, Mountain, Little Feat, Georgia Satellites, Jaimoe, Tinsley Ellis, Albert Collins, Luther Ingram, Roy Buchanan and the Marshall Tucker Band.
Michael Buffalo Smith, Editor of Gritz Magazine who recently saw the band perform, writes, "Tommy Crain and The Crosstown Allstars took the stage next, and simply burned on a 45-minute set of original blues rock. Crain has truly put together an amazing band, recorded an equally amazing album, and is sounding better than ever."
"Give It To Ya," is the first studio effort from this exciting band. Recorded in late 2004/early 2005, the CD highlights the bands diversity and musicianship. A live CD from the band is also available ~ http://www.cdbaby.com/cd/tcraincallstars.