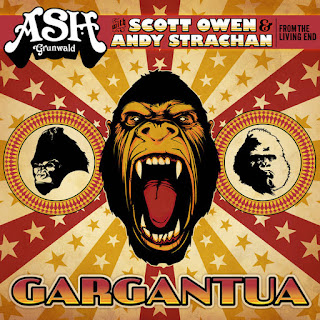 Melbourne blues musician Ash Grunwald has released his full length album Garagantua. The album sees him pair up with The Living End’s upright bassist Scott Owen and drummer Andy Scrachan, after the release of their cover of Gnarls Barkley’s “Crazy.”
The album starts off with “The Last Stand”, which was intended to be used in the Arnold Schwarzenegger film of the same name. However that didn’t eventuate, and the track is about the health problems in Tara, South Western Queensland. The combination of catchy, passionate lyrics and the loud guitar made for an impressive opening track.
“Acting Cool” was influenced by Jack Black’s Tenacious D, and it definitely hit the mark, as it was my first thought about the track when it originally played. The track demonstrates how Ash uses voice distortion to his advantage, and how he can change the tempo of the song with ease. The track is one of two original tracks that came as the result of the three men collaborating.
“Walking” highlights the talents of Scott and Andy, with the first 42 seconds of the three minute track solely instrumental, with several short drum and bass solos. Then there’s the track that started it all; “Crazy.” The cover adds an interesting rock edge to the song without changing the song too much. “Black And Blue” is another cover, originally done by Australian band Chain. The drums in the introduction allow for a focus on Ash’s vocals, without having to compete with the electric guitar. “Raw” is a track that was originally recorded with a full band and released on Hot Mama Vibes. When recording the song with Scott and Andy, Ash describes it as being taken to his “Rage Against The Machine area.”
“Skywriter” is really more of the same, and highlights the main problem with the album; there’s not really any variety. After a while the songs all start to sound the same, it’s just another rock song. The instrumental break is good but nothing that hadn’t been done before and the chorus lyrics are repetitive, so the song doesn’t stand out from the rest. “Mojo” was a song Andy requested to redo, and when listening to the original version, this one is a definite improvement, the heavy electric guitar and drums added strength to the song. The final song is “Smokestack Lightning,” Ash’s all time favourite song from one of his biggest influences, Howlin’ Wolf. It has been transformed from a blues song to a rock song, without losing the beat, so it is clear to tell it is a cover, and was a good choice to end the album with.
Overall the album is a good rock record that varies just enough to be able to forget two thirds of the band is from The Living End. However it would be good to see more variety or more of Ash’s original sound be represented on the album, as the lack of diversity got tiresome by the end of the album. Despite this, the album was successful in showing Ash’s vocal skills and re-confirming the talents of Scott and Andy. It will be interesting to see if the more rock sound of this album influences Ash’s work in the future.