The Lucky Losers - In Any Town 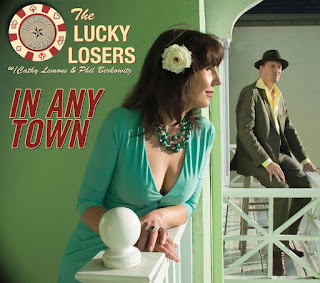 The duo of Cathy Lemons and Phil Berkowitz make up the front portion of the Lucky Losers, a San Francisco Bay area blues band recording together on Dirty Cat Records.  Both Lemon and Berkowitz share the microphone on vocals and Phil lends assistance with some very nice harp work too.  Kid Anderson helped them produce this album at his Greaseland Studios in San Jose.  The CD features nine original cuts and a pair of interesting covers.  Joining them on the CD are Chris Burns on keys, Marvin Greene on guitar, Tim Wagar on bass and Robi Bean on drums. A plethora of great guest artists appear throughout the CD.  “So High” opens things up.  It’s a love song praising the spirit of a love that lasts forever.  More rock than blues, the song is up tempo and uplifting.  Berkowitz gies a nice solo on harp and Kid Anderson appears on lead guitar here, too.  “It Ain’t Enough” follows; it evokes a gospel-ly sort of sultry sound.  Johnny Cash’s “Jackson” is next, with the Bay Area duo going country. “Don’t Let ‘Em See Ya Cry” takes us deep into the blues for the first time on the CD.  This one is greasy and cool as Lemon takes the lead and the band adds horns for some cool depth.  Burns continues to burn it up on keys, doing some nice piano work here.  “Blind Man in the Dark” returns to a mid tempo rocking groove with Phil in lead.  Nice sax solo here (Terry Hanck makes an appearance).  “Can’t Change Ya” is a rocking sort of cut with Lemon and Berkowitz swapping leads.  Greene’s guitar solo is solid here as is Berkowitz’ on harp.  “Still Enough Time to Cry” has Phil up front in a bouncy and fun song with more good piano, guitar and harp solos.  “Give Me a Sign” opens with some wah wah/reverbed guitar by Jeff Jensen and Lemons’ also with some reverb on the vocals.  It’s an interesting cut with a primal beat and nicely distorted harp.  Anderson returns to lead guitar in the ballad title track.  His subdued solo fits the tone of the song well.  Lemons wails about her being tired of being told what to do by people offering useless help.  The song has a country tinge and shows Lemon at her best.  Berkowitz offers up “Devil’s Dream” next, a psychedelic and demonic take on the blues.  Interesting stuff!   The album closes to Bobby Charles’ “Small Town Talk,” a cut he co-wrote with The Band’s Phil Danko.  The whistling is intact from the original; Phil and Cathy approach it as a duo with some interesting accompaniment making things a little slicker but still cool.
This is a fun album with some bluesy moments.  If you want straight up, traditional blues this may not be for you.  If you want something original with a blue tinge and a country and rock feel and a very slick production then by all means try this one out!  The artists perform with feeling and give it their all.