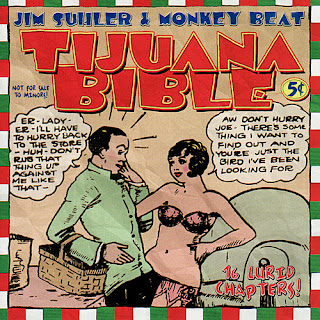 Longtime fans of Jim Suhler & Monkey Beat have come to expect the finest in flamethrower-style Texas rockin' blues and to plug Tijuana Bible into your CD player is sort of like having Billy Gibbons, Freddie King, Johnny Winter and T-Bone Walker show up to paint your house. The house won't get painted in fact, it'll probably be destroyed in the subsequent party but you're gonna have a damned good time while it happens. Tijuana Bible contains 13 new Suhler originals - witty, literate, groove-basted barroom classics along with finely interpreted material by such Jim Suhler heroes as Rory Gallagher, Elvin Bishop and AC/DC. Not only does Bishop guest star on the album, so do guitar master Joe Bonamassa and vocalist Jimmy Hall of Wet Willie fame. Suhler has a fireworks approach to lead, rhythm and slide guitar. It's the sort of attitude and approach that has always sparked his fine live and studio work with Monkey Beat as well as with George Thorogood and the Destroyers, for whom he's played lead guitar since 1999.
For over 17 years, Jim Suhler and Monkey Beat have been churning out rousing border-rock music, and it shows in the aged and perfected sound on their new CD, Tijuana Bible. The hard driving music is awash with first-rate musicianship and southern melody. But other than a chronic belief in hard driving blues-rock, there's really nothing remotely religious in the title of the new album from Suhler, who is also a member of George Thorogood and the Destroyers; Tijuana Bible is the phrase used for X-rated comic books that circulated throughout the United States during the Great Depression and into the '60s in the heyday of media censorship, in kind of an underground manner. The content on the CD cover, though colorful and superior in quality to the real thing, pokes fun at the sexual humor that was found in the shoddy little publications.
The opening riff in Tijuana Bible, the first track on the CD, carries enough weight of its own to put smiles on the faces of Tex-Mex rock lovers everywhere, those with a taste for the hot 'n nasty. The song's heavy blues atmosphere is coerced along in a lethargically funky ZZ Top manner. Suhler's delightfully malicious chicken pickin' and rhythmic groove is as addictive as tequila and sangria on a warm summer night. And that's just the salt flanking the margarita glass. The second song, Devil In Me, yields a potent slide guitar within a devilishly driving rhythm, putting the monkey into Monkey Beat for sure.
Joe Bonamassa is special guest guitarist in Deep Water Lullaby, an interesting accolade to Jimi Hendrix in which both Joe and Jim strut their stuff side by side. Jimmy Hall of Wet Willy sings backup in Po' Lightnin. Though Black Sky takes it to another place, the vigorously electrifying arrangement is too hyper to stick around anywhere for too long. It's an excursion of sorts, vivid in melody and instrumental diversity. Border Rock goes off in a rockabilly tangent, and Mexicali Run brings it back into Tejas mode again, a la ZZ. Of course, Chaos In Tejas maintains that approach in a deep, dirty, and funky way. Juice is an intense acoustic blues.
While the 13 original tracks on Tijuana Bible are sufficient enough to make it a superb CD, the three added covers are nice complements. Elvin Bishop's Drunken Hearted Boy is an excellent choice, especially with Bishop there to play slide guitar throughout the relaxed slow blues track (not that Suhler needs any help in that category). Though you keep waiting to hear the wild vocal angst of either Bon Scott or Brian Johnson rise up over the guitar fire in Up To My Neck In You, Suhler does a fine job on his own in the AC/DC cover, and his blistering guitar solo is turbo charged and cranked. Rory Gallagher's I Could've Had Religion is another good choice, as its energetic atmosphere and vocal angst are enough to please even the late Irish blues rocker. And again, Suhler's slide guitar technique is brilliant.
Tijuana Bible is an all inclusive collection of stimulating border rock and blues songs from Jim Suhler and Monkey Beat, which is Suhler on guitar and vocals, Carlton Powell on bass, Shawn Phares on keyboards, and Jimmy Morgan on drums. Though all are standout musicians, Jim Suhler's guitar playing is amazing. His songwriting and vocal abilities are top notch as well. And as the cover states, the contents are 16 lurid chapters from Suhler's Tijuana Bible. It's a quality CD that should not be ignored by music fans who like a straight shot of Tex-Mex rock with a strong twist of blues. --Brian D. Holland, Modern Guitars, March, 2009