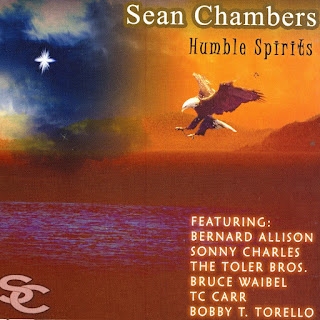 This is Sean Chambers' 2nd release, and features special guests Bernard Allison on 3 songs, The Toler Brothers and more!. Guitarist, singer, and songwriter Sean Chambers counts Jimi Hendrix and Stevie Ray Vaughan among his primary guitar influences, and their type of guitar stylings can be heard in his recordings and at his live shows. Raised on the Gulf coast of Florida, like so many others enamored with blues and blues-rock who played guitar, the younger Sean Chambers also lent his teenaged ears to recordings by Johnny Winter, Freddie King, B.B. King and Albert King, as well as Eric Clapton, Jeff Beck, and ZZ Top.
Chambers released his debut album, Strong Temptation in 1998, after 15 years of playing out in clubs and refining his vocal and guitar talents. After finishing up college, Chambers caught a break in Memphis in 1998 when he was asked to play with former Howlin' Wolf guitarist Hubert Sumlin at a Memphis blues festival. He subsequently toured with the veteran guitarist -- who recovered from cancer to get back on the road -- for the next four years. Chambers has shared stages and sat in with many of his blues and blues-rock heroes, including Derek Trucks, Gregg Allman, Kim Simmons, Tab Benoit, Jeff Healey, Leslie West, Rick Derringer, Pat Travers, Kim Wilson, Bobby "Blue" Bland, Walter Trout, Big Bill Morganfield, Koko Taylor, Ike Turner, and Robert Cray, among dozens of others who frequent the Tampa area club scene. Chambers tours mostly in Florida with the occasional foray north or to the Midwest or to Great Britain. His discography includes just two albums, but a third is in the works. They include Strong Temptation for Vestige Records and 2005's Humble Spirits for Rockview Records. In 2001, Great Britain's Guitarist magazine named Chambers one of the Fifty Greatest Guitarists of all time. ~ Richard Skelly