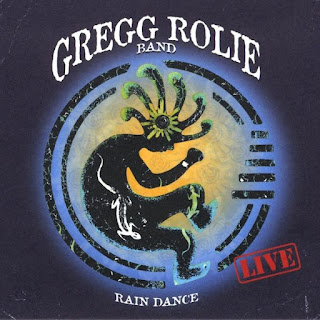 Former Santana and Journey keyboard player/vocalist Gregg Rolie took his band out on the road back in 2007 and put together this live set from various recordings, now released as a limited edition CD called Rain Dance-Live. The line-up of  the Gregg Rolie Band consists of founding Santana member Michael Carabello on Congas, Adrian Areas (son of original Santana  percussionist Jose Chepito Areas) on Timbales, drummer Ron Wikso (ex-The Storm), Kurt Griffey on guitars, legendary bassist,  Chapman Stick artist and former Santana member Alphonso Johnson, and ex- Jean Luc Ponty keyboardist Wally Minko, so as you can imagine, this is a pretty hot group Rolie has assembled here. At times, Rain Dance comes across as the worlds best Santana
tribute band, and in fact, there were numerous times I thought I was listening to an old Santana live recording from 1971. It's that close to the real thing folks. Also splattered in are a few tunes from Rolie's 2001 solo release Roots. First off, Rolie's vocals are spot on here, and he sounds just as good on "Going Home", "No One to Depend On", "Jingo", "Evil Ways", and "Black Magic Woman" as he did 40 years ago. With his swirling Hammond, the layered Latin percussion, Johnson's tasty bass grooves, and Griffey's frightening Santana-ish guitar licks, these tunes sound so close to late 60's/early  70's Santana that it's scary. Kurt Griffey is a monster player, and every now and then you can hear his hard rock, heavy blues, & metal chops come through, especially on tracks like "As The Years Go Passing By" and the blazing "Gypsy Queen", where he rips  it up with plenty of passion and stunning technique.
If you are in for a retro ride down Santana Avenue circa 1970, Rain Dance-Live should go a long way to scratching that itch for  those old Santana sounds. Great to hear Gregg Rolie back in action again-this guy can still sing up a storm, and those tasty  Hammond riffs of his have been missed. The band he has here feature some monster players, so let's hope they continue on with this and put out some original music together in the not too distant future, and take this to the next logical step, something that Rolie's 90's band Abraxas tried to do but wound up fizzling out.