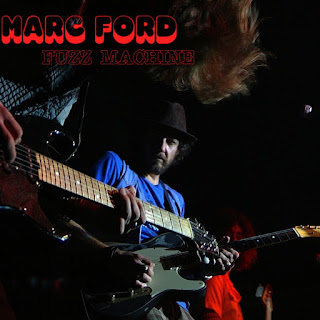 Aside from half-hearted Neil Young comparisons made by half-hearted critics, Marc Ford’s first three solo albums have shown a blue-hued, versatile integrity that few artists of his caliber, much less his generation, can imbue. His fourth, Fuzz Machine, isn’t rife with intentions to broaden that scope, but to deepen it, and over its course, it sounds like success.It is an absolute ‘guitar’ record, and if you were expecting something else, then you probably just are not paying attention. Yet, in an obscure way, it’s actually an album of songs about love. Sometimes the conversation turns intense and intimate, as in the album’s centerpiece, “My Love”, then more pleading and knowing, such as with “Next To Me” and “You’re The One”, as well as the soulful closer “Future Too”, which was recently featured in FX’s Sons of Anarchy.In keeping with proper blues & roots traditions, self-spun cautionary tales bring some gravity to the love-in, perhaps none more strongly than the album’s guitarathon, “Bluebird St.”, a grooving, hulking, effected slab of reggae’d-psychedelic blues that turns nearly towards exorcism. In some ways, the album’s first three tunes give a listener the lay of the land. The opener, a somewhat country-ish “Cool Heads” is followed by the Raw Power onslaught of “Half Dead”, with the exotic, modal “Bolero In Red” feeling like Tarantino & Rodriguez’s next closing credit epic.Throughout the album, Ford’s mates dance around the boss’s space, yet never leave matters unattended. Mark “Muddy” Dutton (bass, keys), formerly a third of the woefully forgotten Burning Tree, and drummer Dennis Morehouse alternate atmosphere with authority while Ford’s son, Elijah, rounds out the quartet on guitar, piano, and backing vocals.For an album that lacks pretension and nostalgia in equality, Fuzz Machine is a righteous roadmap of American Guitaricana. It may be the guitar record of 2010.