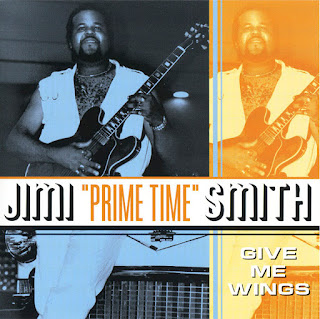 Recorded live at Blues Alley, in the heart of the warehouse district in downtown Minneapolis, Give Me Wings is a debut album for Jimi "Prime Time" Smith and the Prime Time Players, who are the house band there most weekends.
Jimi Smith's roots are deep in his hometown of Chicago, Illinois, where he came under the early influences of J. B. Hutto, Jimmy Reed, and others who he was exposed to by his mother, Johnnie Mae Smith (Dunson), who was a drummer and songwriter with many of the blues greats in the clubs of the Southside, the Westside, and the corners of Maxwell Street.  Authenticity is a key description for Jimi Smith. He is simply a natural in the Chicago tradition. There is no sense of "trying" to sound like a Chicago blues player - he is a Chicago blues player. Jimi's influences are right on the surface - clean and uncluttered. In fact, Jimi is likely the only true 100% Chicago styled blues guitarist and singer working in the Twin Cities today.  Backed by a host of terrific musicians, each with an extensive history of their own, Jimi has never sounded better. The Prime Time Players include Michael Pendergast on the Hammond B3 organ, Donald "Hye Pockets" Robertson on drums, and Mick Massof on bass. Also appearing on this CD are Minneapolis' West Bank fixture, Tom Burns on harmonica, on "U For Me", and Captain Jack McDuff on the B3, playing his own tune, "Walking The Dog".  The songwriting skills of the group are also showcased, including the title tune "Give Me Wings" (a clear highlight), and "One Woman Too Many", both by Michael Pendergast; the funky "Tippin" by Donald Robertson; and two penned by Jimi, "U For Me" and "Out On A Line". Covers which are also highlights of the CD include "When You're Doin' Alright" by Jimi's mother, Johnnie Mae Dunson; "Soul Fixin' Man" by Luther Allison and James Solberg; and a fine rendition of "I'll Play The Blues For You" by Jerry Beach - popularized by Albert King.
Authenticity can be also be used to describe this CD as a live recording. The quality of the recording and the mix are top end. The atmosphere of the club comes right through the speakers. Blues Alley has always been a great room to hear the blues, and now it's a great room to record the blues too. When you can't get there, you can put Give Me Wings on the CD player and have the next best thing.