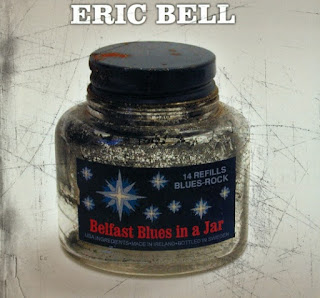 Like so many up-and-coming guitarists in those days, The Shadows immensely influenced Eric. He played in a number of groups, notably with Them, and eventually joined a Blues band called Shades of Blue, replacing their guitarist, a young man called Gary Moore. By 1969 Eric bell wanted to form a three-piece Blues-Rock jam-band, like Hendrix and Cream. He hooked up with Phil Lynott (vocals, bass), and Brian Downey (drums) formed Thin Lizzy. Bell's bluesy, Hendrix-influenced lead guitar proved perfect for the hard rocking direction that both Lynott and Downey also sought for their new band. Eric also came up with the name for the band, inspired by an old Dandy comic book robot character called Tin Lizzie – the 'Mechanical Maid." Later, keyboard player Eric Wrixon completed the line-up. And the rest – as they say is history… When Thin Lizzy first started Eric played the Blues to enthusiastic crowds in bars and clubs around Belfast, before "Whiskey In The Jar" became a huge hit and propelled the band, and especially front man Phil Lynott, to legendary stardom. But Eric never gave up his love for Blues music, and has now returned to his musical roots, revisiting songs from Blues heroes such as the three Kings of the Blues; Albert, B.B. and Freddy, as well as Muddy Waters, Buddy Guy, Howlin' Wolf, Albert Collins and Elmore James.