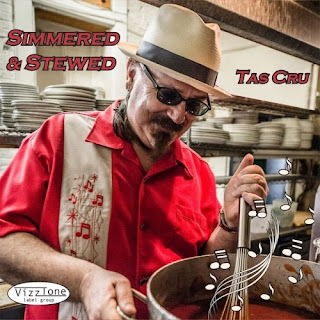 Raucous, rowdy, gentle, sweet, eccentric, quirky, and outright irreverent are all words that fittingly describe Tas Cru’s songs and testify to his reputations a one of the most unique of bluesmen plying his trade today. Cru has received wide praise for his songwriting: As Downbeat magazine notes, “His songs are blues poetry – crafted with rare verbal flair and his ability to cast a memorable hook is magical!” Live, these songs are performed with power and passion. As observed by Living Blues magazine, “The vivacity and sheer joy with which Cru plays is intoxicating!” His brand new album, Simmered And Stewed, now available for pre-sale, will be released November 11, 2016 through the VizzTone label group — eleven songs flavored in most part by resonator, cigar box and acoustic guitar. The album features harmonica, honkytonk piano, Hammond B3 organ and rich, backing vocals. The new album is a worthy follow up to his 2015 album, You Keep The Money – the hottest debuting blues album of the year, almost all year long residing at or near the very top of every major blues chart. It debuted at #1 on the Roots Music Report, with eight of its twelve songs in the top 25, and the album debuted on the prestigious Living Blues Chart at #2.
Presently living in upstate New York. Cru performs in a variety of formats ranging from solo acoustic to a seven-piece backing band. Tas Cru appears at major festivals and blues venues throughout the US and Canada. He and his band of Tortured Souls regularly visit Beale Street during the Blues Music Awards and the International Blues Challenge where at the Rum Boogie Cafe; he has hosted a highly successful fundraiser for the Blues Foundation’s Generation Blues Project for several years running. A committed social activist, Cru also brings his award-winning Blues Education programs and workshops to numerous schools, hospitals and community centers.
Tas Cru is represented by Music on the Couch Artist Management (Vinny Marini) and is currently booking appearances through the Road Dawg Touring Company.