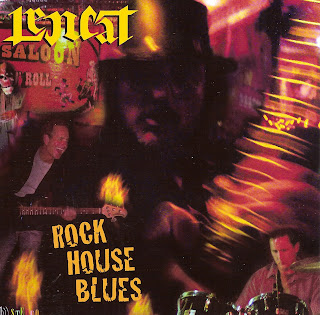 “Rock House Blues, the 6th album from LenCat, could have just as easiliy been called the Bar Band Blues. It celebrates the life and good times of our local pub/lounge/tavern/bar/dive/night club life. As long as there's a stage and some lighting LenCat will play to the crowd, bring out the best in them and deliver a hometown feel-good night. Just listen to those last 3 cuts loosely recorded at some of the Bay Area's finest Rock and Blues establishments.
For over 25 years LenCat has performed, recorded and rocked in the Bay Area. Sometimes they're bluesy and soulful. Sometimes they're hard rockin', Sometimes they're weird and warped. But they are always entertaining! LenCat is Len Callo on Guitar and vocals, Rob Barry on Bass, A.J. Leddy on Drums and, for this album, very special guest harpist, the world renowned Andy Just. Rounding out the great Harp Corp is Earl Smith and John Franks.
What is a LenCat?
The origin of the name comes from the time, in the early 80's, when Len ordered a 10 album, Frank Zappa, box set from Zappa's mail order catalog. A few of the discs were warped so Len sent the whole box back. Well, someone in Franks shipping department didn't like that so, when they shipped back a new box, there was a snide note that read "Hey Len cat, next time just send back the discs that are warped instead of the whole box"
Cut to the year 2000: Len was putting out his first solo cd (the long out of print "Battered, Tattered, Bruised and Abused") and thought that the name Len Callo was too boring.
He remembered the "Len cat" remark, changed it to LenCat and used it as a stage name/band name. And now you know the rest of the story.