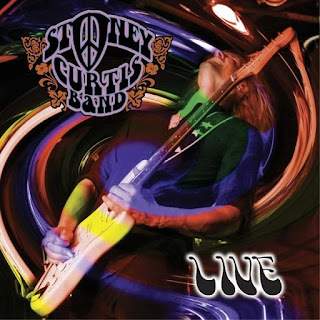 This is one of those rare times when you can almost judge a CD its cover. That bands psychedelic logo in front cover capturing Stoney Curtis in his element knee-deep in the blues, lets fans know to expect something amazing. The Stoney Curtis Band has been working the clubs between Las Vegas and Los Angeles, for over ten years honing their own brand of psychedelic blues-rock readying their show for the road ahead. Over the past few years the band has done a number of that USA tours and six European tours as well.  Heavily steeped in 60's/70's psychedelia, the Stoney Curtis Band has translated the energy of their phenomenal live show into an incredible CD/DVD package "Stoney Curtis Band Live". In the tradition of classic blues rock power trio such as the Jimi Hendrix experience, Cream, Stevie Ray Vaughan, and Double Trouble, the Stoney Cutis Band are centered around their lead singer/lead guitarist Stoney Curtis who is, without a doubt, one of the most impressive strat players on the circuit today. It is no wonder why rows and rows of Harley's line up in Vegas to see this aggressive trio whip the crowd into a frenzy with their own brand of psychedelic blues-rock fueled by Stoney's non-stop guitar pyrotechnics.