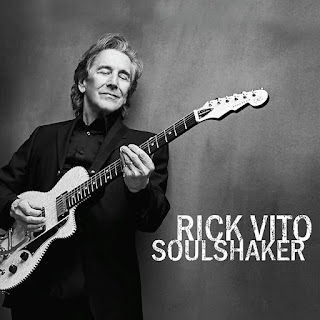 SOULSHAKER highlights his incisive songwriting, soulful singing, and the slide guitar playing that Bonnie Raitt describes as “sharp as a Cadillac tail fin.
Rick Vito is best known as being a member of Fleetwood Mac from 1987 until 1991 when he took over for Lindsey Buckingham. Vito’s first solo album was 1992’s “King of Hearts” on Atlantic Records. In 2001 Vito won a Blues Music Award for writing the Song of the Year, “Its 2 A.M.”, sung by Shemekia Copeland on her album “Wicked”. Vito was also part of the Mick Fleetwood Blues Band, and he received a 2010 Grammy nomination in the category of “Best Traditional Blues” for his work as artist and producer on their album “Blue Again”. Vito has worked with Bonnie Raitt, John Mayall, Bob Seger, Jackson Browne, John Fogarty, Rita Coolidge, Maria Muldaur, Roy Orbison and others. He has nine previous albums and two DVDs. Vito’s last recording was 2015’s “Mojo on My Side”, first released as an import on Belgium Hypertension Records, before being released in the U.S. on the Delta Groove Record label. Overall Vito appears on over 100 recordings.Featured on this recording are Vito, guitar, bass, keyboards, and vocals; and Charles “Mojo” Johnson or Rick Reed, drums. Additional musicians include Kevin McKendree or Mark Horwitz, organ; and Charles Harrison, bass. All of the songs are from Vito except for two.The opener “She’s Just Too Fine” is followed by the smoky “I’ve Got A Secret” with an evocative guitar solo from Vito, and it’s own lyrical sensuality. Reed’s drums power “I Do Believe” with a great slide solo. “The Ball and Chain” was co-written by Vito with Steve Moos. “Doggin’ Around” was written by Lena Agree and first recorded by Jackie Wilson in 1959; McKendree is featured on organ. The closer “A Change is Gonna Come” is the Sam Cooke classic recorded in 1964. Vito’s last several albums have elevated him to the top of the blues world, as guitarist, vocalist and songwriter. This new album should help him continue to rise as both an artist and festival headliner~ Richard Ludmerer