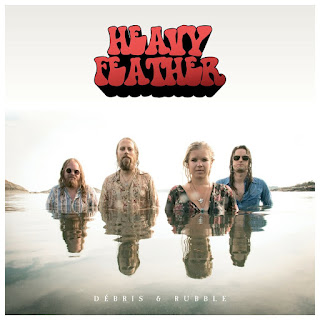 Heavy Feather are the mix of Heart’s Anne Wilson’s vocal and Bad Company’s instrumentals and inspiration. “Debris & Rubble” is an album full of 1970s influences and sounds. This, of course, means that the blues is the main force that drives the album and the band. It also means that songs have that peculiar delicious taste of songs written chordly, not riff-driven. It changes all the mechanics of the song allowing bands to explore deeper their songwriting abilities. So, “Debris & Rubble” is full of delicious songs embellished by vocalist which name I was unable to find. Pityful! As you may have noticed I like those hippie music. I confess! I do love those seventies vibes, but I don’t like to be called hippie. As a matter of fact, I hate it. But the music made in the 1960s and 1970s are incomparable. Bands like Cream, Coven, Led Zeppelin, among others are the roots of Metal music. To modern listeners Heavy Feather may sound outdated, but make no mistake, they aren’t the past, they are the future. I say so because it’s in the past that Metal bands are looking for references.
I must say I loved the Anne Wilson meets Bad Company. If I may, go right to ninth track “Hey There Mama” and check it out. BTW, Heavy Feather are so into the music they play that even songs’ titles are related to the real deal. They almost nailed the psychodelic atmosphere in “Please Don’t Leave.” It was very near. If you go even further, you may recognise some Janis Joplin in it. Nah, but that’s too much. With all due respect to Heavy Feather. Let’s boogie!
Heavy Feather “Debris & Rubble” will be released on April 05th via The Sign Records.