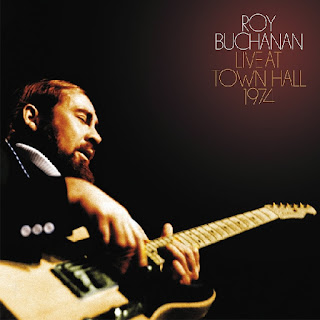 Roy Buchanan is the guitarist's guitar hero. Singularly uninterested in rock stardom and the trappings of fame that go with it, Buchanan never achieved the popularity of his six-string peers; yet his unfathomable technique and ferocious Telecaster tone put him near the top of any serious listing of the greatest guitarists of all time. Stories abound about the regard with which other musicians held Roy (and the indifference with which he greeted their esteem); for example, legend has it he turned down the Rolling Stones for the job Mick Taylor got, and blew off playing with John Lennon, while Jeff Beck dedicated "'Cause We've Ended as Lovers" from Blow by Blow to him. These days, his ability to create the sounds he did without the use of any effects, often from his patented "pinch harmonic" method of playing, continue to astound players both casual and professional. Buchanan recorded a number of commendable studio albums, but on stage was where the magic happened; that's why most listeners deem the 1974 Live Stock album to be his best. But the tracks on that album, like most live records, were cherry-picked from several different shows, in this case both sets Roy played at New York City's Town Hall on November 27, 1974. In fact, of the 21 songs Roy played that night, only six came out on Live Stock, and one other, a version of Neil Young's "Down by the River," came out on a subsequent compilation. That leaves 14 unreleased performances-and now, Real Gone Music presents Live at Town Hall 1974, a 2-CD set that captures both shows in their entirety, drawn from the original multitrack tapes recorded that night by The Record Plant Mobile Studio. Several things strike you as you listen to these two shows. First, this was a good band, perhaps Roy's best, with Malcolm Lukens on keyboards, John Harrison on bass, Ronnie "Byrd" Foster on drums, and Billy Price on lead vocals when Roy didn't take a turn. Second, the six tracks originally selected for Live Stock were the "safe" tracks, showing the band at their most succinct. It's no accident that all but one came from the first show; during the second show, the band-perhaps spurred on by some refreshment during intermission-positively swaggers as Roy deals one lightning lead after another, even having fun with a faulty patch cord on the first song of the second set. For this monumental release, we've made every effort to put you right in the front row; both our liner note writer (Buchanan biographer Phil Carson) and photographer (Charles R. Cohen) were there that night, and have the stories and shots to prove it. Mixed and mastered by Tom Lewis at Studio 1093 in Athens, Georgia, and produced by Bill Levenson, this one's a major addition to the Buchanan discography and further proof that nobody, but nobody, played guitar like Roy Buchanan.