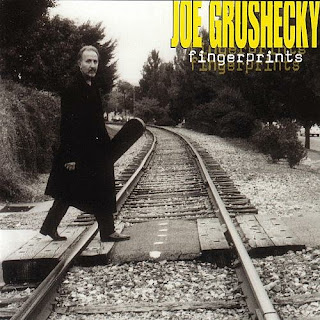 For better than a quarter-century, first as a major-label artist leading the Iron City Houserockers and later recording for various indie labels, Pittsburgh's Joe Grushecky has struggled to get his hard-rocking, blue-collar style of music heard above the din of fleeting trends, boy bands, and pop divas. The gravel-voiced songwriter has suffered the inevitable Springsteen comparisons, survived bad record deals, played hundreds of shows in dive bars, and, with his first true solo album, Fingerprints, has hung around the industry long enough to play on record alongside his teenage son, Johnny. Although Grushecky might never receive the level of respect that his body of work has earned, it hasn't stopped him from making solid, consistently rocking albums. Stepping out for the first time without the Houserockers band he has fronted some variation of for 25 years, Grushecky nevertheless doesn't stray far from familiar creative territory on Fingerprints. "It's a Crazy World" burns with a self-righteous fervor, mixing social commentary with topical events to make a timeless point about our cultural priorities. "On the Wall" opens old wounds, putting faces to the names on the Vietnam memorial, a haunting reminder of the price of war, while "Hey Lefty" offers a found remembrance of a departed friend. Although songs like the dancefloor funky "Easy Money" or "Talk Is Cheap," with its electronically altered vocals, explore new stylistic territory, Fingerprints is unabashedly a rock album. Grushecky's vastly underrated guitar work shines through these songs, a lifetime of playing allowing the artist to show both divine subtlety and great bravado on the six-string while the assembled band of friends offers solid support to Grushecky's material. It is a pair of songs, however -- "Rainy Day in Pittsburgh" and "I Will Not Let My Spirit Fall" -- that provide the clearest insight into Grushecky's artistic soul. A gentle statement of defiance, "I Will Not Let My Spirit Fall" is an overdue recognition that, for the artist, fame and fortune probably aren't right around the corner. After 25 years of raging against the machine, it's easy for an artist to become frustrated and angry, but Grushecky understands that life goes on and, as long as you're proud of what you've accomplished, you can stand tall. "Rainy Day in Pittsburgh" is a folkish love song, written by Grushecky not only for his wife and family, but also for his fans and for the city that continues to support his work. It's a powerful statement, an indication that Grushecky isn't forsaking the Houserockers, or even turning his back on rock music, but will carry on as long as the muse stands by his side. Fingerprints is a transitional album, one that finds Joe Grushecky embracing the reality of middle age even while honoring the roots of his long-past rock & roll youth.