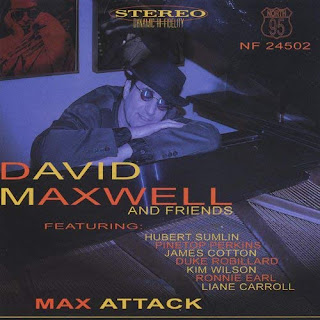 Originally released on the Blue Max label in 2003, with this 95 North Records version appearing in 2005, the gifted David Maxwell's piano opens this fun and important disc up with the mostly instrumental "Sticky Buns," which drives like a cross between the J. Geils Band debut and Traffic during their John Barleycorn Must Die phase. That jazz vs. blues battle continues later on the CD with the majestic and grooving "Moving Out of His World," which absorbs moods from different genres and delivers true modern electric blues. Picture Jim Morrison sitting at the piano in his sixties (though Maxwell is a good decade younger than Jimbo would have been at the time of this release), assuring the woman that the change in partners is nothing to fret over. "Hip-House Rock" changes things dramatically, an entertaining instrumental with plenty of lively space in between. Producer Tino Gonzales does a superb job keeping things crisp and not getting in the way of Maxwell's arrangements on this material recorded between July and November of 2005. The piano on "Thanks for All the Women" is bright yet still dark in tone, a nice balance as the guitar answers are separated in the stereo mix. With James Cotton, Ronnie Earl, Duke Robillard, Pinetop Perkins, Liane Carroll, and the redoubtable Hubert Sumlin as just some of the marquee guests, Max Attack is an engaging follow-up to 1997's Maximum Blues Piano. While "Handyman" is pure blues (not the Del Shannon/James Taylor hit "Handy Man" written by Otis Blackwell and Jimmy "Handyman" Jones -- this disc is all Maxwell originals), the title track, "Max Attack," opens jazzy with chirping horns before morphing back into a bluesy showcase -- perhaps a nice intro to Buzzy Linhart concerts, as Maxwell is also that legend's music director. Liner notes by Ted Drozdowski of the Devil Gods and the latter-day Scissormen make for a very nice package on this hour's worth of music by a superb musician deserving more appreciation.