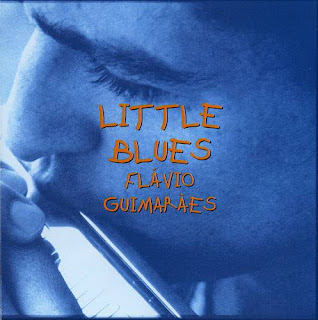 Little blues is the first solo album recorded by the Brazilian singer and harmonica player Flávio Guimarães. The album counts with the participation of many famous blues artists from Brazil and abroad, such as Paulo Moura, Ed Motta, Roberto Frejat and Sugar Blue. The songs in the disc also presents some influences of the jazz/
He started his musical career around 1985. In 1986, he formed the group Blues Etílicos, with Greg Wilson (vocals and guitar), Otávio Rocha (guitar), Gil Eduardo (drums) and Cláudio Bedran (bass). With the group, Guimarães did many show around Brazil and world and recorded several albums. In 1988, Guimarães travelled to Chicago, where he played with many American musician, including the harmonicist Sugar Blue. One year later, he opened Festival de Blues, in Ribeirão Preto, São Paulo, Brazil, playing with Buddy Guy. In that same year, he also opened shows for John Lee Hooker and John Mayall, during Free Jazz Festival. In the following years, Guimarães played in the most important festival in Brazil, such as Blues Fest, Rock in Rio II and Nescafé in Blues. During this period, he also played with many famous Brazilian artists, like Ed Motta, Roberto Frejat and Paulo Moura. He played with internacional artists too, such as Midnight Blues Band. Since 1990, when Bizz magazine indicated Guimarães as one of the best hamonicists of Brazil, he has participated of many hamonica players meetings. In fact, Guimarães became famous between Brazilian harmonicists because he was the first one to play diatonic harmonicas in that country, introducing new possibilities of timbre to the music of his nation. In 1998, he participated of Harmonica's Night, with Carey Bell and Peter Madcat. In this same period, with a new band, he opened show for B. B. King, in Via Funchal, Brazil. He, with Tavares da Gaita, was considered one of the most important attractions in the history of Rec-Beat festival, in Recife, Brazil. Along his career, Guimarães recorded many album. His first solo album was Little Blues.
Little Blues
Автор: errny на 09:46