Scott Ellison - There's Something About The Night 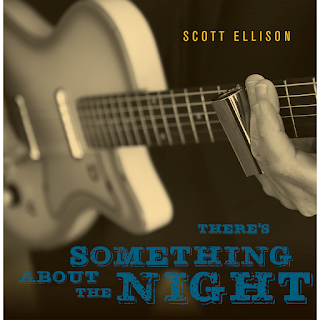 A talented singer/songwriter, guitarist, and blues-rocker, Scott Ellison was born on February 13, 1954, in Tulsa, OK. By the '70s, Tulsa had become an unexpected hotbed of blues-based rock bands (as proven by both Eric Clapton and Freddie King's backing bands hailing from the area), which was around the same time that Ellison began playing with others, such as country singer Jesseca James (Conway Twitty's daughter) in 1977 and renowned bluesman Clarence "Gatemouth" Brown in 1981. Ellison relocated to Los Angeles by the mid-'80s, however, keeping his music career going by playing with the Box Tops, the Shirelles, the Coasters, and Peaches & Herb, and by the '90s he had formed his own blues band and opened for the likes of Joe Cocker, the Fabulous T-Birds, and Buddy Guy. It was also around this time that Ellison began issuing solo albums, including the titles Chains of Love and Live at Joey's. Shortly after returning back home to Tulsa, Ellison issued his third release, Steamin', followed by One Step From the Blues, which featured several other Tulsa musicians backing him. In addition to solo records and playing with other artists, Ellison has also penned songs that have appeared in such hit TV shows as Sister Sister, Eye on L.A., and the soap opera Santa Barbara, as well as the soundtrack to the Ben Affleck motion picture Reindeer Games. In 2001 Ellison issued his first release for the Burnside label, Cold Hard Cash, produced by longtime Robert Cray producer Dennis Walker.
The Latest CD from Tulsa born Scott Ellison, playing the blues with hints of Rock 'n' Roll and Soul, wrapped in a contemporary shell. A member of the Oklahoma Blues Hall of Fame since 2013, Scott continues to tour the United States and Canada. Produced by the legendary Steve Barri (ABC/Dunhill and Warner Bros.) In Scott's words: I must say how much I've enjoyed the entire process of working on this album, There's Something About the Night, starting with the classic hit, "Aint No Love in the Heart of the City" to the very last song. It was sheer joy to put these songs together and to collaborate with my Oklahoma home boys" Having the multi-talented Grammy writer and producer Steve Barri being our executive producer was the cherry on top! Having his input and expertise in making some of the greatest records of all time was a true blessing. It doesn't get any better than that!

There's Something About The Night
Автор: errny на 08:04