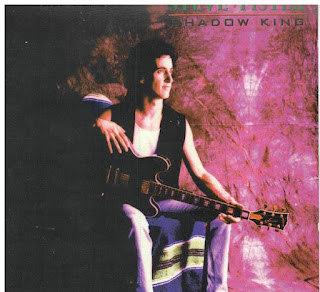 Long-time sideman Steve Fister (Lita Ford, Pat Travers, Steppenwolf) stepped out on his own with this 1996 solo release. For Shadow King, he enlisted noted players Greg Bissonette on drums and Stu Hamm on bass which results in an album that is not short on musicianship. Derek St. Holmes adds vocals to three cuts, but the rest of the album consists of instrumentals. Self-produced, Fister reveals himself to be a multi-dimensional and thoroughly versatile guitarist. He can fire off a machine-gun spray of notes with the best of them, but he also understands subtlety and economy, which is incorporated into his playing with engaging, results. "Big Guitars & Fast Guitars" is high-octane and built around an infectious summer groove. "Steam Shuffle" is propulsive and kinetic with some thunderous drumming from Bissonette and "Hyperboogie" is a musical cousin to Van Halen's "Hot For Teacher" which lives up to its name. The versatility of Fister really shines through on the languid blues of "Slow Slide Down" and the hauntingly moody title track to which former Double Trouble member Reese Wynans adds organ. Shadow King is the rare guitarist album that can engross the average music fan with its strong sense of melody and obvious respect for the blues.