Bobby Radcliff - Live at The Rynborn 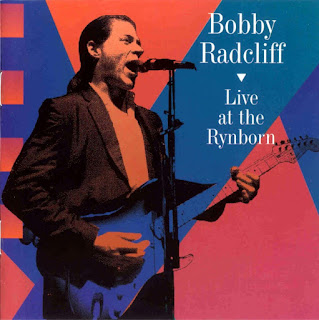 This raw, intense, honest performance was captured in November 1996 at the Rynborn Theatre in Antrim, New Hampshire. Radcliff's in-your-face style demonstrates his bravery, for this recording is not flawless (it is live, after all) and there are times where you find yourself saying "What was that?" -- but that's what makes it so appealing. Radcliff is not an imitator but rather an interpreter, and he is an especially great admirer of the Chicago West-siders, particularly Magic Sam. Although this CD is 90% standards (just one original), he manages to surprise even those listeners who thought they'd heard it all. Selections range from Bill Doggett's "Honky Tonk" to a well-disguised Kool & the Gang medley. Playing here with a trio, Radcliff rips off solo after solo throughout. He switches back and forth between lead and rhythm, shifting gears frequently when it comes to the rhythms themselves. He sings on several tunes but vocals are definitely not his strong suit. At it's worst, Live at the Rynborn is an interesting listening experience; at it's best it is a volatile and brash performance in a very cool way. It is not for the faint of heart, and that's what makes it a lot of fun.